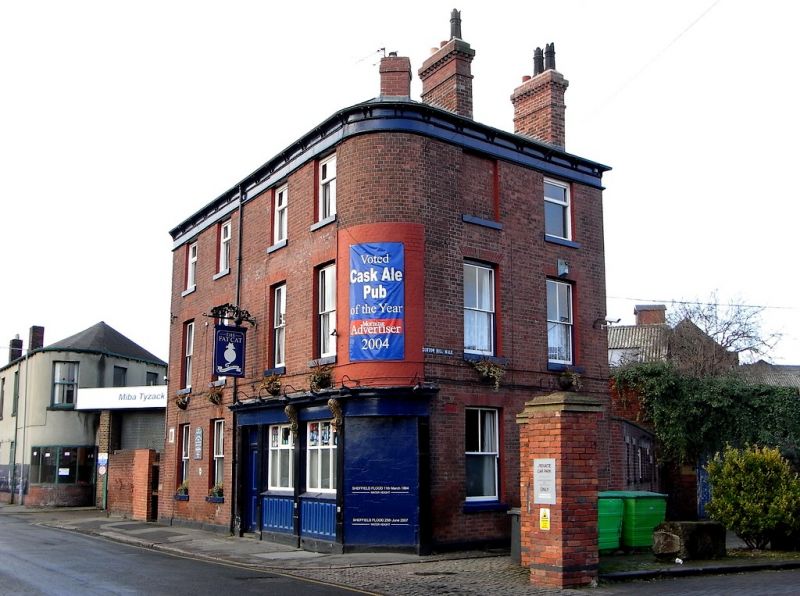 Public house and former hotel. Mid-C19 with mid-C20 attached toilet block and late-C20 brewery Red brick with white painted panel with advertisement on corner. Slate roof and end, ridge and mid-roof stacks. PLAN. Corner site. Two bars at front separated by a corridor. EXTERIOR. 3 storeys. 4 bays to Alma Street, 2 bays to Cotton Mill Walk. Rounded corner with blocked entrance on ground floor. Central entrance on Alma Street; to left two sash windows, to right two three light casements with transom in a shopfront setting. Fascia panel, with 2 console brackets, running above and between the doorways. Etched glass in ground floor windows. Sash windows on 1st floor, with late C20 joinery above. INTERIOR. Small entrance lobby with mosaic floor bearing the legend "CANNON ALES", dating shortly c.1912. Corridor with terrazzo floor leading to bars left and right and doorway to servery on right. 3-sided servery with a canopy including coloured glass over and a clock under a rounded pediment; said to have been a payment settling kiosk brought from a Co-op butchers in Rotherham, c.1981. HISTORY. The pub was taken over by William Stones Ltd (brewers of Cannon ales), 1912. Changed name to the Fat Cat 1981. Home brewery established 1990 (known as the Kelham Island Brewery). A little-altered and typically detailed example of a mid-C19 pub and former hotel in an industrial quarter of central Sheffield, and which provided leisure and refreshment for working men and accommodation for travellers before the rise of modern hotels. The exterior and plan are largely unaltered apart from the addition of a mid-C20 toilet block, and the building continues to forms an important component of a working industrial environment.