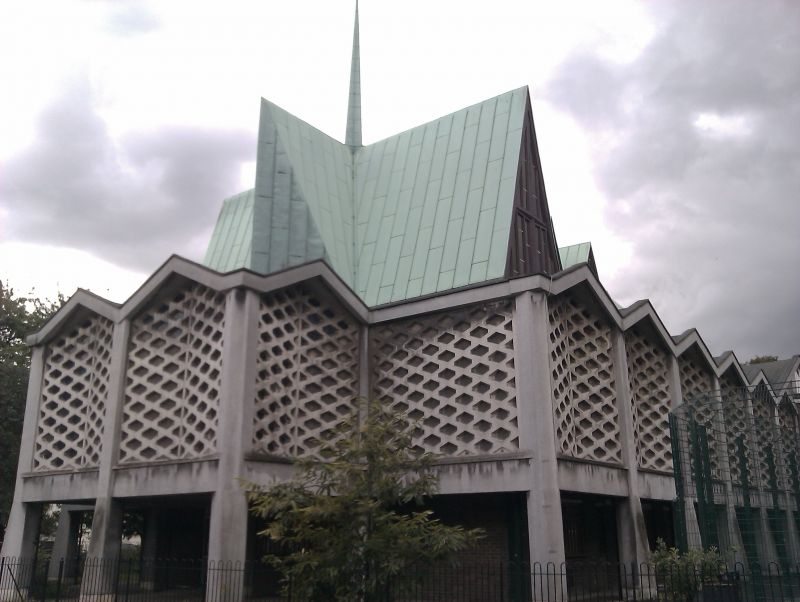 Parish church. 1959-60 by H G Coulter of Woodroffe, Buchanan and Coulter, assisted by Walter William Chapman (Ministry of Education), John Wimbleton and Brian Walker. Reinforced concrete in-situ frame supporting pre-cast timber and steel roof. Its facetted structure gives it triangulation and great strength, clad in copper. Wall infill of precast concrete blocks perforated and infilled with ?antique? coloured glass, and brick, over plinth formed of rubble stone from the earlier church destroyed in 1941. Ground floor youth club rooms and offices, now adapted to offices and partly let to charities, with church and church hall above reached via staircases inside and out and with double doors linking the two spaces.

Quirky elevations dominated by steep-pitched, faceted copper roof, with fleche over entrance, and with deep eaves. Six-bay church has concrete honeycomb concrete facade, with antique coloured glass infill, set between projecting concrete piers and under zig-zag gabled eaves. The Lady chapel forms a projection at East end, similar in style but with lower eaves. Underneath, set back, the ground-floor offices are infilled in brick, with renewed hardwood glazing, always seen in shadow and therefore not inappropriate. The entrance to these offices is at the East end, under the Lady chapel. On south elevation, projecting steps set in rubblestone and with steel balustrade lead to the entrance to the church and adjoining hall. Wayside pulpit of stone to side, with memorial stones and brasses from the old church and the Alexandra Institute set alongside. Projecting concrete 'A'-frame under deep gabled eaves continues as semi-open fleche. The two-storey church hall alongside has some renewed fenestration, weatherboarding and remodelled roof. Inside a small demountable office has been inserted on to the former stage area. The church itself, however, is remarkably little altered.

Double glazed doors lead to vestibule, from which one enters the church or the hall. Almost square church, to emphasise the unity of the congregation at the Eucharist. The church is dominated by its soaring roof, lined in unpainted timber, with white painted ribs to emphasise this unusual structure. Fittings, including the pulpit, font, and crucifix all designed by Wimbleton. East end sculpture of the Risen Christ in Glory by Freda Skinner, symbolic of the Crucifixion, Resurrection and Ascension, over altar with applique decoration by Gerald Holtom depicting the twelve apostles. The theme of the risen Christ is continued in the altar fittings. The pulpit is situated close to the altar, symbolising the link between the Eucharist and the word, and there was originally deliberately no lectern. The font was designed for mobility to suit the nature of the service, and reflecting the changing Liturgical ideas of the time, in which the position of the font remained the most contentious. Bench seating, altar rails and bishop's chair all part of this ensemble. West doors also lined with hangings by Gerald Holtom, the central doors depicting St Paul's life. Lady chapel with statue rescued from the old church and restored by Freda Skinner.

Woodroffe, Buchanan and Coulter's church replaced one of 1854-6 by J Jarvis which was destroyed by bombing on 10 May 1941. The unusual form of the church was suggested by the unusual precast timber roof structure, which was delivered in complete sections and hoisted by crane into position, and by the plan, which was progressive both in being aware of changes in liturgical thinking, and in the desire to provide club and common room facilities for the Brandon Estate being built around it. Wimbleton had trained as an engineer, and the experimental system then being introduced by Beavis, timber importers, appealed. The firm went on to experiment with hyperbolic paraboloid roofs, such as at Hatfield baths. The triangular theme of the structure emphases the importance of the Trinity in Eucharistic worship, and of the Risen Christ in Glory represented in the figure at the East end and other fixtures.