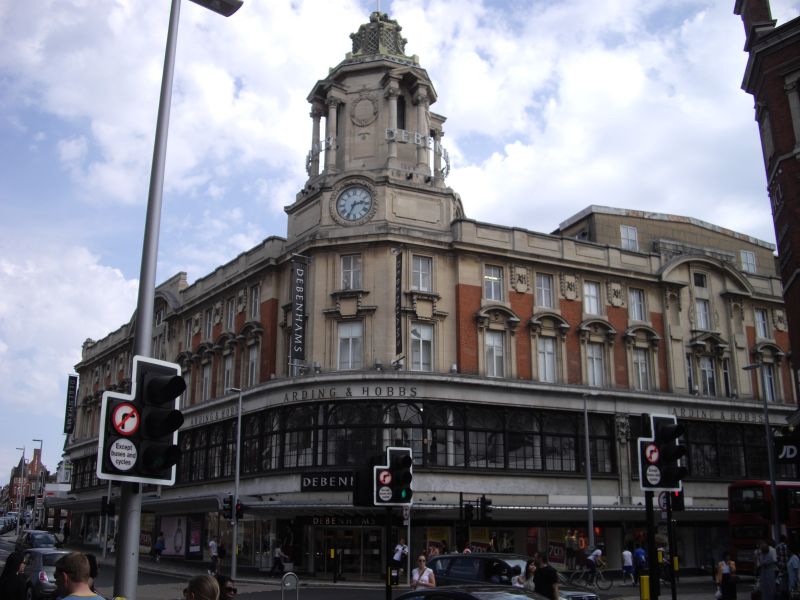 Department store. Built in 1910 by James Gibson in Edwardian Baroque style. Some late C20 alterations including shopfronts and internal alterations. Structure steel framed with reinforced floors for fire protection but exterior clad in red brick in Flemish bond with stone dressings and centrepieces with Wrennaissance treatment.
EXTERIOR: Four storeys with nine windows to Lavender Hill front, twenty to St John's Hill front and three to the corner under the principal feature of the building,a large octagonal stone tower with florid dome to top and base with carved ovals with crown and four open pediments supported on composite columns. Below the corner cupola the second and third floors are of stone with large blank panels to parapet, moulded cornice and architraves and second floor windows having in addition blank tablets above with swags. The remainder of the nmain fronts have a panelled parapet with piers at regular intervals. Third floor windows are in moulded architraves flanked by panels with the initials A and H and swags. Second floor windows have curved open pediments, console brackets and blank panels. Lavender Hill front has central large curved pediment on pilasters through second and third floors with round-headed niches with putto, keystone, swags and blank panels. Second floor window has open pediment, console brackets and carving. The St John's Hill front has two of these centrepieces, the southernmost one with an early C20 gabled extension above. The entire first floor has a continuous wooden display window with round-headed fanlights, brackets and pilasters and stone fascia above with name of shop. Ground floor shopfronts have been replaced with 1970s aluminium shopfront and canopy. The southernmost four bays of the rear elevation to Ilminster Gardens has similar treatment to the main elevations. The remainder of this elevation is set back. The central 12 bays has pilasters, plain triple wooden casements and right side ground floor windows with leaded lights and some heraldic shields which would have been part of the sales floor. Left hand side has three shutter fronts doors and canopy. Northernmost part has three round-headed windows to second floor and mullioned and transomed metal casements below. Stone rear entrance with panel with fasces and shield with the initials A and H.
INTERIOR: Originally the ground and first floors would have been the main sales floors with with workrooms above, dispatch at basement and third floor levels and restaurant, called the Ardington Rooms, on the third floor. Secondary staircases with cast iron railings and some original doors, particularly on the ground floor. First floor has original plaster moulding and some cast iron columns with plumed capitals. The second floor has structural cast iron columns. The third floor has a stained glass dome, coved cornice and high relief plaster with fruit motifs and an adjoining room with segmental arched ceiling with square panels and painted over lightwell with stained glass which originally housed the restaurant. There are also plaster mouldings and plainer columns on the third floor.
HISTORY: The firm of Arding and Hobbs started as a drapery shop in Wandsworth High Street in 1867 but moved to the present site because of its greater commercial importance. The original buildings on the site of 1881-1885 were destroyed in a fire of 1909. The present buildings were the largest and grandest department store built south of the Thames.At the time of inspection early photographs of both buildings on the site were on display on the third floor.