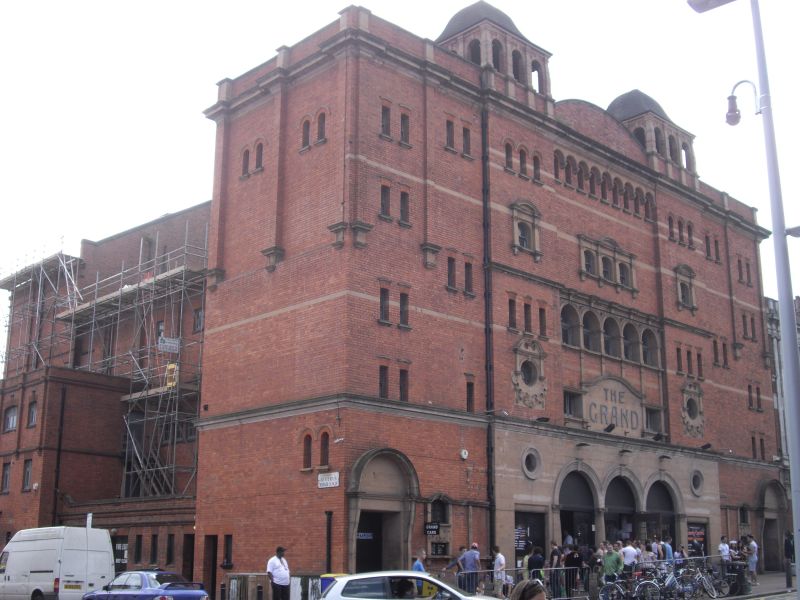 ST JOHN'S HILL SW11
1.
5033
Grand Theatre
TQ 2775 9/6
II
2.
1900 by E A Woodrow; built as Grand Palace of Varieties by a partnership which
included Dan Leno. The building is something of a local landmark and it is now
one of the few remaining suburban relics of the fin-de-siecle variety palace build-
ing boom. The exterior is robust rather than elegant; the interior, despite
alteration, is unusual and interesting.
Red brick with sparse stone ornament. Symmetrical 7-bay facade, 3 narrow bays on
either side of a wide centre, the bays framing the centre set slightly forward and
crowned by belvederes with ogee roofs. The general impression is one of large
areas of machine-made brick relieved by arcaded loggias variously treated in the
centre bay. The entrance canopy has been altered and the columned entrance leads
to an altered foyer.
The auditorium has been converted for bingo; the original stalls seating has gone
and the proportions are marred by the insertion of a false ceiling, but above this
the original ceiling and gallery survive.
The elaborate Chinese decorative scheme is unusual and would be impressive if
restored and correctly lit. Boxes with tented 'pagoda' canopies and modelled
plaster dragons, etc and a ceiling in the form of an 'inverted willow pattern
plate'.