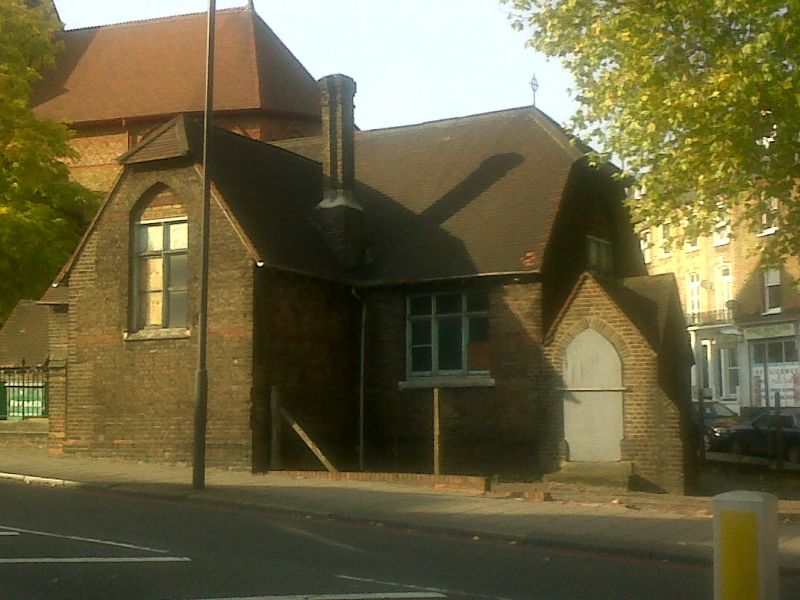 Church elementary school. 1866-7 to the designs of Benjamin Ferry, at the expense of Philip Cazenove on land donated by Earl Spencer, Lord of the Manor. Stock brick with red brick bands, tiled half-hipped roof, with large polygonal stacks set in angle and at rear. Irregular plan on site apex site. Single storey. Roof projects over dentiled eaves. Large timber casement windows with square panes to schoolroom in end walls project into gable, and are set within polychromatic pointed recesses. One of these, to road, is inscribed `ST MARK'S SCHOOL 1866'. Windows in rear elevations renewed. Doors in projecting porches, one within pointed arch, one renewed.

Interior not inspected but noted to contain single large school room with open timber roof, into which a suspended ceiling of no interest has been included.

St Mark's School is a rare and little altered example of a diminutive church school in London, whose building coincides with the development of Clapham Junction in the 1860s. Benjamin Ferry was among the leading church architects of his day and he may have supposed that the subsequent commission for St Mark's Church, which the school adjoins, may have come his way. Instead it went to William White, a slightly younger and more radical architect in the Gothic style and the two buildings form a fine group.