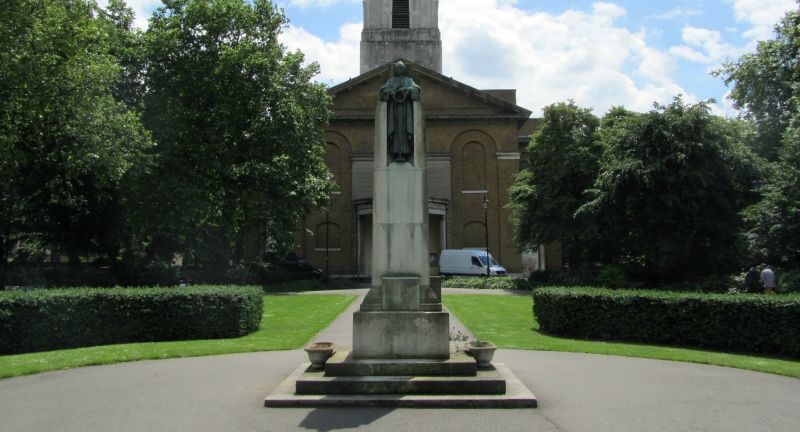 GV II
War memorial by Hermon Cawthra. Portland stone pillar/obelisk with stepped top and bronze figure in upper niche on north side. On a square base of three steps; lower step pale granite. Inscriptions to north, south and west sides. Bronze, robed figure of a knight to north side, holding sword and wreath.

The almshouses in Wattisford Road for Disabled Soldiers and Sailors, referred to in the inscription, was opened in 1923. Designed by Gunton & Gunton, they consist of a row of six cottages with a semi-detached house at each end.

HISTORY: The memorial was designed by the sculptor Hermon Cawthra FRBS ARCA (1886-1971). Cawthra was a sculptor in stone, wood and bronze. He was born in London, studied at Salts Art School, Shipley, the Leeds School of Art, the Royal College of Art, and the Royal Academy Schools. He exhibited at the Royal Academy and other leading London and provincial galleries. Cawthra's best-known work is the statue of Robert Burns of 1936 at the Burns Mausoleum in Dumfries. He designed several war memorials, including those at Bury and Bootle in Lancashire, and other sculptures including a Mother and Child in Bishop's Park, Hammersmith and Fulham. He also completed relief work for the Sadler's Wells Theatre building of 1930 in Islington (listed grade II).

The St John at Hackney war memorial was dedicated by the Bishop Suffragan of Stepney on 8 August 1921 and unveiled by Sergeant Harry Kenny and Sergeant Issy Smith. It commemorates the men of Hackney who served and died in WWI and WWII.

On 28 July 1922, The Builder magazine published pictures of the memorial. It reported that through the design 'the connection of Hackney with the mediaeval crusades (the Knights Templar were located at Temple Mills in 1270) is linked up with the recent campaign in Jerusalem, in which Hackney churches took part'.
SUMMARY OF IMPORTANCE: The war memorial has historic special interest as a permanent testimony to the sacrifice of the people of Hackney in the wars of the early C20. Furthermore, the St John at Hackney memorial has special architectural interest in its striking design by a noted sculptor. The stripped-down geometric design of the pillar neatly frames the contrastingly fluid and expressive bronze figure. It also has group value with the listed tombs in the churchyard, but more particularly in its direct axial relationship with the grade II* listed church of St John at Hackney and it complements the church tower, which is also made from Portland stone.