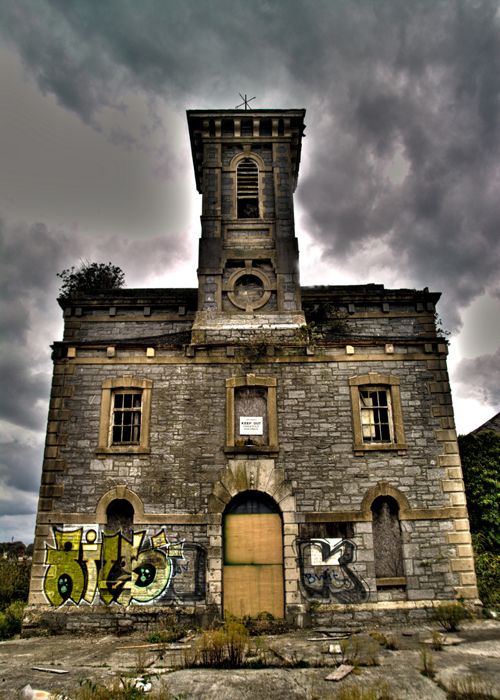 II
Former central block of Plymouth Borough Gaol. Opened in 1849 to the designs of Thomas Fuller (1823-1898) and William Bruce Gingell (1819-1899) with William Clift as building contractor.
MATERIALS: coursed rubble limestone with ashlar and rendered dressings and a slate roof. It is two storeys in height with a basement and a taller bell tower to the centre.
EXTERIOR: The west front facing onto Greenbank Road was designed as the principal front and the central pavilion has the most architectural treatment. It is of three bays with arched, flat-backed niches to either side of the central arched door with voussoirs. A central blank niche to the first floor is flanked by original sash windows of nine panes. There are chamfered quoins to the corners and a simple but emphatic cornice with dentil blocks beneath the eaves. Above the central bay rises the bell tower with a keyed oculus and an arched and louvered opening. The shallow-pitched, pyramidal roof has deep console brackets at eaves level. This entrance front is one bay deep and behind it rises the windowless bulk of the main central block which also has quoins and a cornice. The flanks of this larger block have four bays to each side with taller windows to the first floor. The original north and east wings have now been demolished and there is a consequent scar to the rear of the entrance block which shows the position of a former interior imperial staircase which may have led to the Magistrate's court. The attached south wing (of lesser interest than the central block, having undergone considerable alteration) has 12 bays with blocked openings to the ground floor and sash windows to the first floor on both fronts, all with ashlar surrounds and simple consoles at eaves level; the south-eastern end has a façade added c.1935 when the function changed to the Plymouth Police Headquarters.
INTERIOR: Not inspected. A survey undertaken by Exeter Archaeology in 1996 noted that `the whole of the rear part of the east wing and north-west part of the south wing are underlain by basements containing a series of cells opening off a central corridor. Those under the east wing have outside light, whereas those under the south wing were either lit by artificial light or their external lightwells have been in-filled'. The magistrate's court in the former central block also survives with portions of the joinery of the bench dais and the coffered ceiling.
HISTORY: The town gaol was formerly part of Plymouth Guildhall, but this proved inadequate in the early C19 and a new position was chosen on the site of the former Longfield House, Greenbank, which was also to become the setting for the workhouse and the hospital. The surgery, receiving cells and governor's office were situated in the shortest west wing. The south wing was set apart for women and it included a wash house at its south-eastern end. The north and east wings contained more cells, presumably for men. The governor's house and lodge which are both now demolished flanked the entrance on the present Greenbank Road and there were formerly `airing yards' arranged as a circle and semi-circle, divided by partition walls into segments for solitary exercise and with a warder placed at the hub, to the south-east of the site. The Ordnance Survey 1st Edition map, which was surveyed in 1856, shows the wings with cells set at either side of wide corridors to the eastern and north blocks and to the western side of the south block. Part of the original boundary wall survives and is incorporated in the fabric of the laundry built over the site of the male airing yard. The building was officially closed by the Home Secretary in August 1878 but subsequently re-opened and functioned until the early 1930s. After its final closure the buildings were converted to create the Plymouth Police Force headquarters and in 1935 considerable alterations were undertaken, including the removal of much of the ornate ironwork. The west wing was converted to a magistrate's court and the east wing first floor into magistrates' rooms and a coroner's court. The south eastern end of the south wing was rebuilt, incorporating a new entrance to the police headquarters. Other organisations housed in the buildings included the St John's Ambulance Association, the Petty Sessional Courthouse and the Central Fire Station. The principal use by the Police continued until 1976 when Plymouth Health Authority took over the site and subsequently moved out in the early-1990s.
Thomas Fuller and William Gingell both trained in the office of James Wilson. Their partnership lasted for 4 years and both went on to establish eminent careers. Prominent buildings by Gingell include the Italianate design for Nos. 53-55 Corn Street Bristol (Grade II*) and Bristol General Hospital (Grade II). Fuller designed the Houses of Assembly in Ottawa, Canada, and the New York State Capitol in Albany and the San Francisco City Hall and Law Courts.

* The building, particularly the central block facing onto Greenbank Road, makes a strong architectural statement despite constraints imposed by budget and function
* Although several parts of the building have been demolished and altered since the change of use from a prison in the 1930s, the exterior is still readable as a gaol.
* The architects, Fuller and Gingell, both went on to enjoy considerable esteem in their own right and several of their buildings are designated at higher grades. Plymouth gaol is an interesting example of an inspired design which dates from an early period in their careers.