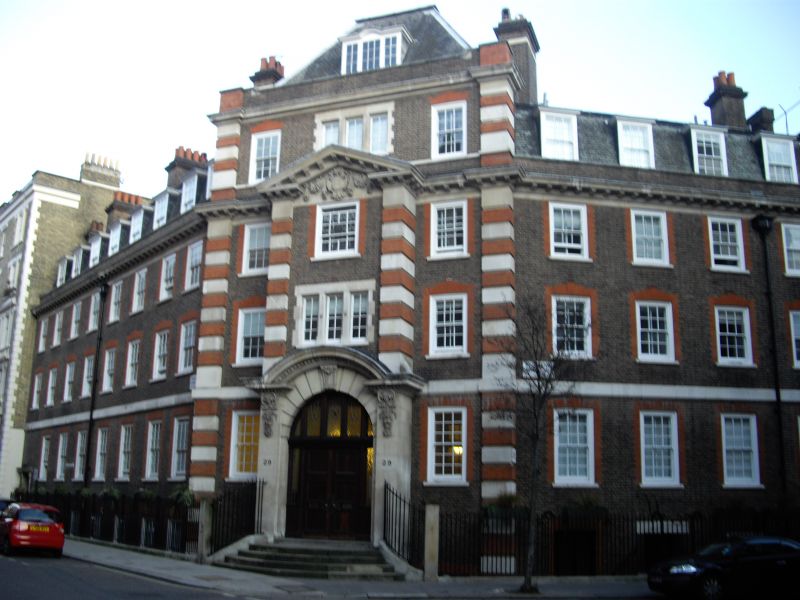 EXTERIOR: This impressive neo-Wren style building occupies a prominent corner site to the rear of Westminster Cathedral. It has eight bays to Francis Street, three bays on the splayed corner, and a further five bays to Stillington Street; has three storeys plus basement and attic, rising to four in the corner section; and is constructed of stock brick with red brick and stone dressings, and a slate roof. The building's main feature is the grand corner section with its distinctive red brick and Portland stone alternating quoins and French style mansard roof with prominent chimneys. Curved stone steps lead to the advancing central entrance bay with its open triangular stone pediment and stone door case with segmental pediment, these with carving of garlands, swags and a cartouche dated 1913 by H C Fehr. The side ranges are more modest, their architecture derived from the terraced houses of late C17 London, with rubbed brick surrounds to timber sash windows, projecting string course painted white, prominent stone dentil cornice and dormer windows in the attic mansards. The quality of materials is high and includes finely gauged brick to the flat arches with keyblocks, decorative cast iron railings and a second entrance with stone door case on Francis Street. There are also characterful signs painted onto the brickwork: one, within an arrow, announces 'ENTRANCE TO No 29'; another by the entrance indicates that this building is '29'. The foundation stone is situated to the left of the entrance and records that Mrs Chaloner Chute, Central President of the G.F.C, initiated construction on 26 February 1913. To the rear, the central section of the building projects in a T-shaped plan. The elevations here are much plainer, but nonetheless distinguished by the superior quality brickwork in the gauged flat arches; the staircase bays have segmental curved parapets too.

INTERIOR: Undergoing refurbishment at the time of inspection, but a number of historic features survive which contribute to the special interest. These include: two sets of entrance doors and a part-glazed stained glass vestibule screen in the hallway; two staircases at the end of each side wing and basement-ground floor staircases in the central section, all with green dado tiling, cast iron balustrades and moulded timber handrails; at least two simple Arts and Crafts style fireplaces with timber overmantles and green tiled surrounds and hearths; a large number of tiled hearths without their fireplace surrounds; a stained glass window in one of the second floor communal rooms with the pious commandment 'KEEP INNOCENCY' in a scroll below a dove; fragmentary dado tiling to the basement room. The plan form, whereby spinal corridors in the three wings access small bedrooms, with larger communal spaces at their apex, survives largely intact although the communal rooms in the basement and ground floor have now been subdivided with partitions.

HISTORY: The hostel was built to provide accommodation for the increasing numbers of lower middle-class women arriving in London to work as clerks, secretaries or shop-assistants in the late Victorian and Edwardian periods. The Girls Friendly Society has been founded in 1875 by Mary Townsend as an Anglican organisation that offered care and support to such women, through seven 'lodges' across west London, in areas like Ealing, Kensington and at 5 Bourdon Street, Berkeley Square where young women 'working in shops in the neighbourhood and (who) require a comfortable and safe lodgings' could lodge in separate cubicles. By 1912, places were inadequate to meet demand, 'owing to the remarkable development and rapid increase in the number of professions and occupations open to women, and the consequent necessity of their leaving their homes and living away from their relatives and friends'. Consequently, this hostel opened in February 1914 on a site close to Victoria Station. As well as having accommodation for eighty women, the building featured a waiting room where women who came into the station on the early morning workmen's trains could wait in safety and comfort for their working day to begin. There was also a large dining room, with a separate exterior door for outside members to patronise it as a restaurant, and a ground floor sitting room or hall. The accommodation was in bedrooms rather than cubicles which, along with the quality of the building and the required membership in the Girls Friendly Society, suggests that the hostel was intended for lower-middle class 'respectable working women and girls' rather than working class young women, although they were all on a small budget. The offices of the London Diocesan Girls Friendly Society were also located in the building.

The hostel was not a charitable foundation, and the Society hoped for dividends comparable to those achieved by investors in Hopkinson House, a lodging house run by another philanthropic organisation, which returned 4% each year from 1908-1911. This may have been what prompted the Society to establish itself as share-holding limited company in 1912. There was, however, a strong moral flavour to this enterprise. When the Bishop of London opened the building in February 1914 he commented that 'when a girl came to London to earn her living she was confronted with loneliness and with moral dangers ... Where was she to find friends and that quiet religious influence which would be her mainstay in time of temptation? That hostel would answer the need.'

R Stephen Ayling was the architect of five significant commissions for women's lodging houses between 1902 and 1914. A member of the Southern Committee of the National Association for Women's Lodging-homes, he was ideally-placed to design the lodging house on Francis Street.

SOURCES
E Gee, 'Where Shall She Live?' The accommodation of working women in the capital 1875 - 1925 (Architectural Association, Graduate School, 2007)
N Pevsner and S Bradley, Buildings of England London:6 Westminster (2003) p.697

REASONS FOR DESIGNATION: The London Diocesan Girls Friendly Society hostel is listed at Grade II for the following principal reasons:
* special interest in the history of social housing, in which hostels for women were a significant development responding to the dramatic increase in women's work, independent from the home, in the late Victorian and Edwardian period;
* one of the finest women's hostels architecturally, with a handsome façade and superior materials and craftsmanship throughout including stone carving by H C Fehr;
* the aims of the Girls Friendly Society and the historic function of the building are expressed through its architecture and surviving features, which include dado tiling, staircases, some fireplaces, a stained glass window and the broad plan form.

The former London Diocesan Girls Friendly Society hostel meets the criteria for listing for the following principal reasons:
* special interest in the history of social housing, in which hostels for women were a significant development responding to the dramatic increase in women's work, independent from the home, in the late Victorian and Edwardian period;
* one of the finest women's hostels architecturally, with a handsome façade and superior materials and craftsmanship throughout including stone carving by H C Fehr;
* the aims of the Girls Friendly Society and the historic function of the building are expressed through its architecture and surviving features, which include plenty of dado tiling, staircases, a few fireplaces, a stained glass window and the broad plan form.