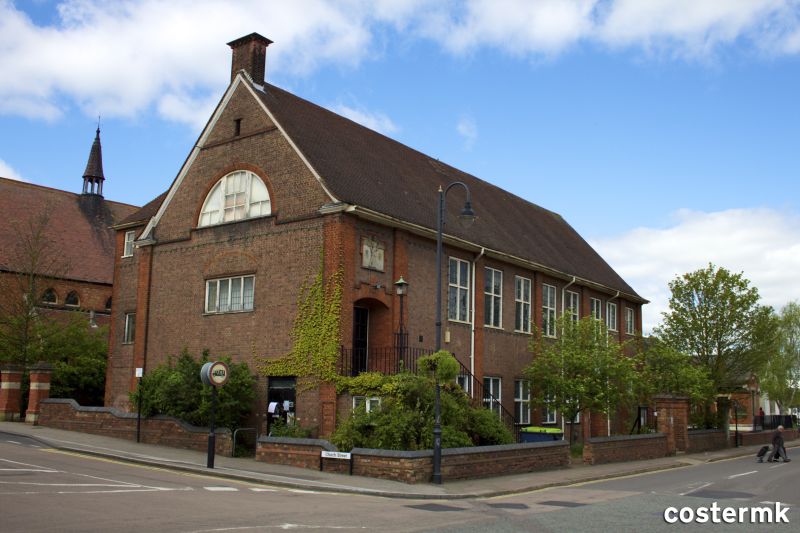 PLAN: Rectangular, with wing to rear right and stair tower to rear left.

HISTORY: From 1826 the new railway companies began to establish their own works for servicing locomotives and rolling stock. Almost always these were sites that were almost, or entirely virgin, away from towns: at Shildon, Crewe, Swindon, and Wolverton. If men were to be attracted to these works, and retained, good quality accommodation was needed, and thus companies erected towns alongside them. At Crewe, for instance, a salaried architect was employed for eight years laying out all aspects of the grid-plan town, and although no architect is associated with Wolverton something similar presumably happened there; both places, after all, were created by the same company.

Wolverton began to grow close to an existing canalside village after the London and Birmingham Railway (incorporated in the London and North Western Railway in 1846) established its works here in 1838, at a midway point between the two cities where engines could conveniently be changed. Locomotives were made here until 1861; thereafter carriage building largely took its place. In 1886 the works covered 37 acres and employed 2,000; by 1907 both figures had more than doubled, staying at these levels until the early 1960s. In 1986 the workforce was reduced to under 1,000. Today the works are largely vacant and some demolition has already taken place. Wolverton was incorporated in the new town of Milton Keynes in 1967, and although the town has retained its individual identity there has been some substantial redevelopment.

The Institute and Sunday School is of 1908, and was designed by Charles Marriott Oldrid Scott (1880-1952) who worked in his father's practice of J. Oldrid Scott & Son, of 8 Dean's Yard, Westminster and who here and elsewhere was well-connected with leading metropolitan architects. In 1910 it was extended to a design by George Vicars, a draughtsman at Wolverton's Carriage Works. Minor late C20 alterations. Now used as an arts centre.

Such institutes multiplied in the years around 1900, a product of the philanthropic muscular Christianity (cf. the relief of St. George above the Institute's front door) which was influential between the 1860s and the First World War (Girouard 1981, cap. 16). Thus the Institute also reflects the tradition of care for the town's working folk which was prevalent throughout Wolverton's history.

ASSESSMENT
The Institute of 1908 is an handsome building - restrained, slightly austere in a knowing and clever way, in which a restrained palette of materials is used in subtle ways - which makes an important contribution to the town and to its Conservation Area. It is a scholarly and well-tutored building by a leading London practice with family links to Buckinghamshire. It stands alongside and forms a group with the mid C19 St. George's church (listed grade II*) and its former vicarage (now The Cedars, listed grade II) yet stands apart from them in its adoption of a simpler, pre-Palladian, influences, notably in the row of first-floor windows. It well merits adding to the list at grade II.

SUMMARY OF IMPORTANCE: The former St George's Institute and Sunday School is a pleasingly austere yet handsome building of 1908 which makes an important contribution to Wolverton's Conservation area. Designed by a leading London practice it forms a group with St George's church and its former vicarage, both already listed.