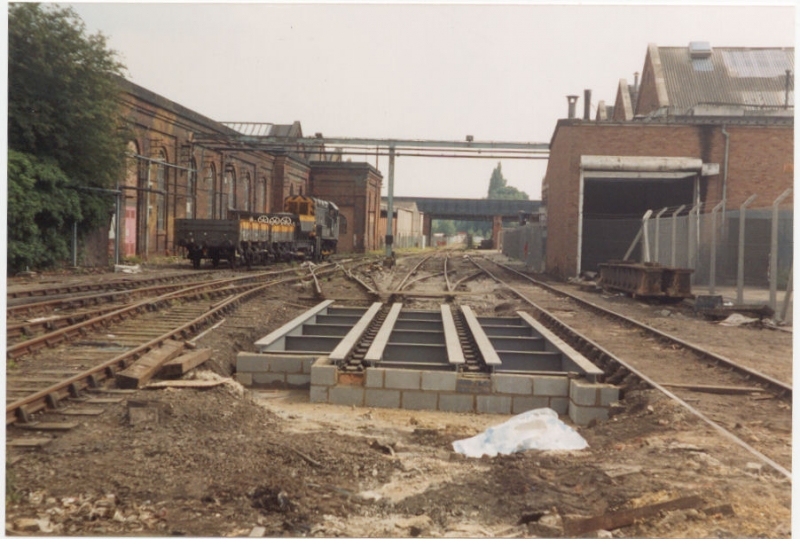 Railway Bridge. Built in 1834-5 for the London and Birmingham Railway, Chief Engineer, Robert Stephenson, widened probably in 1889 by the London and North Western Railway. Cast iron beams with brick and stone abutments. Sixteen cast-iron I-beams carry the track and these are supported on red and blue engineering brick abutments with a stone bearing. One girder is marked in relief lettering, BUTTERLEY (Butterley Iron Company of Derby). All the principal beams have a consistent concave-shaped bracing to the web, double bracing on some and single to others. One beam is faced with moulded timber infill panels that appear to be contemporary with the structure. This was the original eastern face girder. There are now two later face girders on this side. These are wrought iron or steel riveted girders; the bridge was probably widened here in 1889 to ease access to the new Lifting Shop (see Royal Train Shed). The bridge was built in two sections, each of eight beams width and with a space between in the centre. This space was filled by steelwork in the C20 and it is this part of the structure that carries the single railway line that crosses the bridge to give access to the works. The decking is mostly in the original cast iron plates. The bridge parapets consist of C20 timber boarding and steel railings, the original balustrades having been lost with the widening.

HISTORY. The London and Birmingham Railway, which opened in 1838 and became a part of the London and North Western Railway in 1846, built this bridge. This section of the line, which ran through the company engineering works, was four-track from the start, which explains the width of the bridge. This section of the main line was by-passed by 1882, and passenger trains were then no longer carried by the bridge, which explains why it was never replaced, despite the failure of several cast iron beam bridges at the time which led to their replacement in most cases. This railway bridge is now a great rarity and possibly unique on this scale. This bridge is in essence the original Stephenson one as described by John Britton in 1838; 'At this station (Wolverton) the Railway crosses the Grand Junction Canal for the fourth time by an iron bridge with horizontal main ribs'.