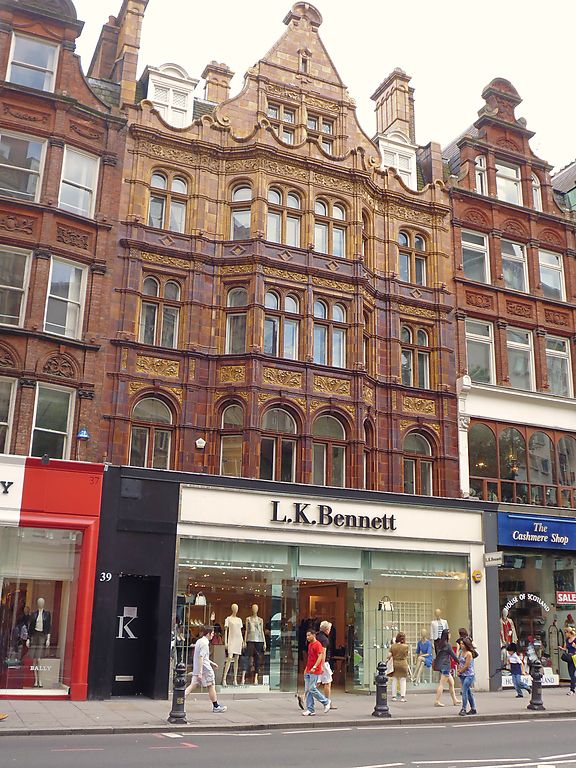 GV II
Commercial premises, 1899, by TH Adamson and Sons of Ealing. Later ground floor shop is not of special interest.

EXTERIOR: Only one elevation is visible from the street, the five storey frontage to Brompton Road. The architectural style is Flemish Revival and compositionally the building does not differ dramatically from neighbouring properties, though it is double their width. In materials, however, it is out of the ordinary; where the other shops in the parade are red brick, stone or terracotta Nos 39-41 is expensively-faced in rich brown and butterscotch faience. The façade has a projecting central bay on the upper floors and a shaped gable, part concealing the attic Mansard with its pedimented dormer windows. The regularly-arranged fenestration comprises round-headed windows with mullion and transom and large keystones to the first floor and pairs of arched windows with transoms above that. The bays are marked by fluted pilasters and between the storeys are friezes or panels of decorative faience, some with lozenges, some with swirling foliage and cherub heads. There are further moulded details in the spandrels to the arched window. The overall level of decoration is unusual. Also notable is the contrast of colours: the lower storeys are a mixture of brown and butterscotch faience; the fourth storey and gable are all butterscotch. Even the tall chimneys are clad in faience. The ground floor a wide shop front opening with modern glazing but above this the building is unaltered.

INTERIOR: The staircase with its timber handrail and chunky blockish balustrade survives. The floors that were inspected, the first and the fourth, have been refurbished and no original features survive. The second, third and attic floors were not inspected. The ground floor has been entirely refurbished and has a modern shop front; it is not of special interest.

HISTORY: This was constructed as part of the second phase of major development on this important thoroughfare which was first laid out with houses in the C18. In the mid-C19 the typical Georgian houses which lined the road had been converted to retail use at ground floor, but more significant changes were afoot from 1888. By this time William Watkins and John Goddard had acquired most of the land south of Brompton Road between Sloane Street and Hans Crescent. Between 1892 and 1908 the block was rebuilt, with a parade of gabled, red brick shops to Brompton Road. The majority kept to the plot widths of the original houses, but two buildings (at Nos 39-41 and Nos 47-9) incorporated two former plots. Perhaps this greater prominence led to the materials used on Nos 39-41 being more lavish than those of its neighbours.

The first occupants, recorded in the Post Office London Directory of 1899, were Conrade E Webb and Sons, cheesemongers. Their name also appears on the drainage application submitted to the authorities in 1899. In 1910 the building is recorded as being empty but by 1915 it was in the hands of Parker Edwards Ltd, house furnishers. Originally there were two shops on the ground floor: a plan of 1926 shows a large shop front with a central porch and two curved glass display windows and a second deep-recessed entrance to the left with narrow display windows leading to a corridor and then a shop floor at the rear of the building. The building became a single retail space at ground floor in c1935 when it had an island display case and an arcade of display windows. This had been removed by the 1950s.

REASONS FOR DESIGNATION: 39-41 Brompton Road is listed for the following principal reasons:
* notable use of materials, in the contrasting blocks of rich brown and butterscotch-coloured faience;
* fully-expressed Flemish Revival style, with plentiful ornamentation;
* the building is characteristic of the best of late-C19 commercial architecture.

39-41 Brompton Road is listed at Grade II for the following principal reasons:
* notable use of materials, in the contrasting blocks of rich brown and butterscotch-coloured faience;
* fully expressed Flemish Revival style, with plentiful ornamentation;
* the building is characteristic of the best of late-C19 commercial architecture.