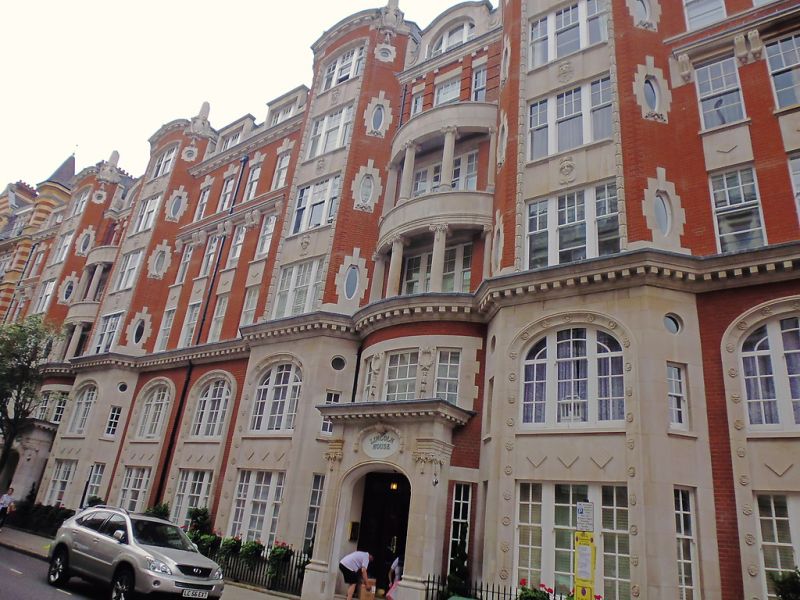 EXTERIOR: Lincoln House faces Basil Street, neighboured by the London Fire Brigade Station of 1907 to the north and Washington House, an Edwardian mansion block of flats, to the south. Its rubbed red brick façade is plentifully detailed with Portland stone dressings and iron railings (not the originals) bound the area in front of the ground floor. The building comprises two identical six-storey blocks each of five bays. In each a central Ionic entrance portico projects from a curved two-storey bay, above which is a two-storey Ionic loggia, a fifth floor with banded pilasters and an attic dormer window in a stone surround with volutes. Each entrance bay is flanked by full-height canted bays with elliptical-shaped parapets which break through the chunky dentil cornice of the principal roofline to encompass the attic storey. The effect of this parade of projecting bays is enhanced by the eight stone obelisks set in cartouches that rise above the building line to each side of the bays. The end bays are plainer, but still have banded stone pilaster which terminate the elevation. Across the range, the ground and first floor windows are set in single, large elliptical-headed surrounds. The upper floor windows are flat- or segmental-headed sashes, with six panes in the upper part, no glazing bars below, set in architraves with keystones or scrolled consoles. The canted bays have oval windows to the short sides; the four storeys of window to the long side are set in a single segmental-headed bay-leaf moulded surround. The entire façade is enlivened by abundant carved stone detailing including laurel wreaths, garlands, foliate masks, lozenges, volutes and cartouches and crockets. The rear elevation and the inner light wells are plain stock brick with red brick arches over the windows.

INTERIOR: Each block has a central lobby accessed via glazed timber double entrance doors with overlights, which are either original or from the 1940s refurbishment. The lobbies are lined with modern panelling and have modern marble floors; the lifts are new too. The front doors to the apartments are all identical; some will be original but others were added when the flats were subdivided in the 1940s. Three flats were inspected. The rough arrangement of rooms survives, although there are now two flats for every one original apartment, along with a smattering of plain eight panel doors and some cornices. Otherwise, these flats have modern fireplaces and other decorative finishes.

HISTORY: The original plans show one of the six-storey blocks and reveal there were originally two flats on each floor (therefore 12 in total per block), each with drawing room, dining room, kitchen, hall, three bedrooms, bathroom and scullery plus a servant's bedroom. Permission was granted for the works in September 1903, but by 1904 the Post Office Directory does not record there being any residents in this part of Basil Street, nor do subsequent directories. It is not until 1916 that Lincoln House - comprising 24 addresses - appears for the first time, suggesting that the two blocks were built c1916. The OS map for 1916, however, shows only one of the two blocks. The survey for the 1916 OS map was probably conducted in the previous year suggesting that the blocks were built one after the other in 1915-16, over a decade after plans were drawn up.

A bomb landed to the north of Brompton Road during the V1 flying bomb attacks of September 1944 to March 1945. This caused damage to Lincoln House which was recorded by the LCC in the category of 'Seriously damaged, but repairable at cost'. In 1946 plans were submitted by architect J Hunt of Eastbourne Mews, Paddington to subdivide the apartments in the building, creating 48 residences where there had been 24. This work involved new doors to the flats and is likely to have also included restoration of war-damaged fabric. Little change has occurred to the exterior since then, but inside some of the flats the arrangement of rooms has been altered and kitchens and bathrooms modernised.

REASONS FOR DESIGNATION: Lincoln House is listed for the following principal reasons:
* an accomplished and highly idiosyncratic design, illustrative of the best of mansion block architecture in the period;
* the materials are used generously, and the red brick façade is plentifully detailed with Portland stone dressings;
* the composition is skilful and plenty of movement is created by projecting porticos, curved loggias, canted bays and the parade of segmental-headed parapets advancing above the cornice.

Lincoln House is listed at Grade II for the following principal reasons:
* an accomplished and highly idiosyncratic design, illustrative of the best of mansion block architecture in the period;
* the materials are used generously, and the red brick façade is plentifully detailed with Portland stone dressings;
* the composition is skilful and plenty of movement is created by projecting porticos, curved loggias, canted bays and the parade of segmental-headed parapets advancing above the cornice.