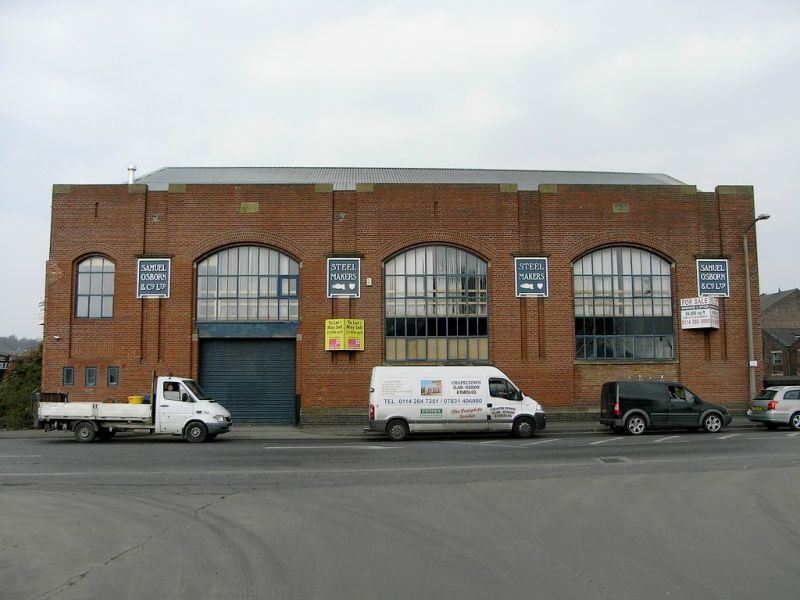 II
Spring manufactory, now warehouse and offices. 1919-1920, by William John Hale, architect, of Sheffield. Red brick in English garden wall bond with modern corrugated steel to 2 subsidiary elevations and to the roof (largely concealed behind parapets).
PLAN: Tall, single-storey rectangular block with 4 parallel gables of varying widths running across the building at right angles to the River Don on its NE side.
EXTERIOR: The Rutland Road elevation is 4 bays wide, the left-hand bay narrower, divided by narrow recessed brickwork panels, a slight lowering of the parapet and rectangular relief plaques painted blue with white lettering (the outer 2 read SAMUEL OSBORN & Co LTD, and the inner 2 read STEEL MAKERS with the company trademarks of a hand and a heart beneath). 2 small datestones (1919 and 1920) are set in the parapet. Stone-capped plinth and stone parapet blocks to either side of the recessed panels and to the outer corners. Vehicular entrance in second bay from left, with modern roller door (replacing part-glazed timber doors), below large segmental-headed multi-paned window. Similar, but deeper, windows to third and fourth bays, with recessed brick panels below. Similar, but smaller, window to left-hand bay, above recessed brick panel and 3 small single-light windows.
The River Don elevation has 4 gables, alternating larger and smaller, each with a large or very large tripartite segmental-headed multi-paned window, with narrow transom panels (reading SAMUEL/OSBORN/& Co LTD, and STEEL MAKERS). The left-hand gable has tall single-light windows to either side of the tripartite window, with panels carrying the company trademarks above. The 2 larger gables (first and third from the left) each have a circular window at the apex, and the smaller 2 have panels with the company trademarks of a hand and a heart. Circular apertures in the parapet between the gables drain roof valleys into downpipes.
The side elevation to Rutland Way has 4 gables, the 3 to the left now clad in corrugated steel sheeting. The upper part of the right-hand gable is slate-hung (corrugated steel to rear). Below are 4 round-headed window openings, now blocked, with stone sills, impost blocks and keystones. Modern doorway. The NW elevation is clad in corrugated steal sheeting.
INTERIOR: A large open working space, with rectangular, riveted columns supporting rolled steel joists running across the building onto which metal strut trusses supporting metal purlins are bolted. Towards the front (Rutland Road) end is a 2-tier modern prefabricated office accommodation inserted into the space.
HISTORY: Built 1919-20 as the spring shop for steel manufacturer Samuel Osborn & Co's Rutland Works, which produced railway springs. Itis the only known industrial building designed by the Sheffield architect William John Hale (1862-1929), who is better known for the designing of Nonconformist chapels, schools and private residences. The Osborn family were fellow Wesleyans in Sheffield. The building was refurbished in the 1990s and re-named Insignia Works after the company trademarks incorporated into the principal elevations.

REASONS FOR DESIGNATION DECISION
Insignia Works is designated at Grade II for the following principal reasons:
* This workshop is notable as an example of early C20 industrial design of a building type which was not usually given an architectural treatment
* Designed by Sheffield architect William John Hale, this otherwise utilitarian workshop is distinguished by its eye-catching principal elevations onto the River Don and Rutland Road, which incorporate large windows, subtle architectural detailing, and relief panels advertising the name and trademarks of Samuel Osborn and Co Ltd, steel manufacturers
* This extravagant, architect-designed, workshop illustrates an optimistic moment in the history of Sheffield, whose steel manufacturing and processing skills had been integral to the war effort of World War I through the production of armaments and munitions, and had consequently brought economic benefits to the city.
* Insignia Works has group value with the adjacent Rutland Road Bridge (q.v.) over the River Don, from which the best view of its principal elevations can be seen.