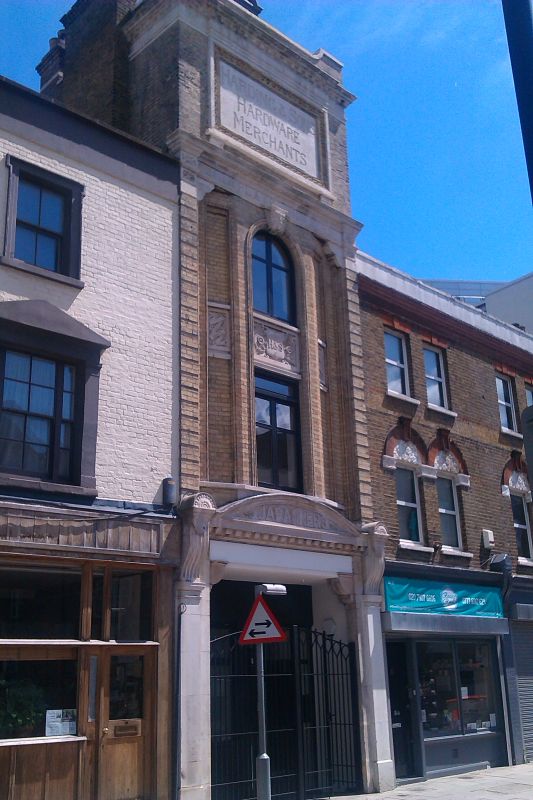 II
Former hardware merchants' workshop. Built 1891, to the designs of an unknown architect.

MATERIALS: Primarily of beige stock brick in Flemish bond, with stone dressings to the cornices, entrance-way and windows. A new pyramidal slate roof with southern dormer window to the tower section, which is partly obscured by a parapet, with the remaining parts flat-roofed.

PLAN: A narrow terraced building of four-storeys, with basement and attic. There is an end-wall brick chimney stack to the south west. All floors except the first are undivided. There is evidence on all floors that doorways have been cut through, and blocked up, into the neighbouring properties, at various dates.

EXTERIOR: The ground floor of the façade is dominated by the wagon-way that occupies its full width, with simple carved stone pillars to either side and a shallow curved pediment with the word 'JAPANNERS' in relief. Originally, full-height double doors allowed entrance to the building.

The first and second floors read as one with brick quoins and a shallow canted bay with central windows, the upper of which is arched. Relief plaques are positioned between the floors. The outer plaques have scrolls with the words 'wire / workers' on the western one and 'metal / merchants' on the eastern. The central plaque is dominated by a shield with the initials 'H&S', all surrounded by scrolled foliage. The key stone above the second floor window has a relief of a bearded man - possibly Hephaestus, god of fire, blacksmiths and metalworking. The stonework cornice between the second and third floors, with its heavy cornice and decorated capitals, bears the inscription 'TIN PLATE WORKERS'. The third storey is dominated by a plain stone plaque bearing the inscription 'HARDING & SONS / HARDWARE / MERCHANTS' in a decorative font. There are no windows on this elevation. The façade is topped by a plain brick parapet with bracketed cornice.

The rear (north eastern) elevation of the building has been greatly extended and altered since its original construction. It is stepped to a depth of three bays, with only the top storey of each bay being visible. The upper storey of the tower has a central casement window under a round arched brickway. The parapeted flat roofed three-storey bay has a brick blocked doorway and boarded window, both under brick arched surrounds. The parapet to this storey has been rebuilt and rainwater goods added. The rear double depth bay, which again has a flat roof and small brick parapet, has a single doorway under a flat brick surround.

INTERIOR: Very few original features remain. Within the tower section there are fireplaces in the first and second storey rooms, both of which have been infilled in brick. There are staircases, within the tower bay. That from the ground to first floor is of brick and concrete construction whereas that between the first and second floors is wood. Both are very simple with no decorative elements, including handrails or balusters surviving. The basement and roof room were not inspected.

HISTORY: The Southwark trade directories first list George Harding & Sons at No. 19 Tabard Street in 1891, a date which accords with the building's design. The Ordnance Survey maps do not show the site in sufficient detail to determine differences between the maps of 1878/9 and 1896, but rebuilding work was being undertaken in the area during this time. Before Harding & Sons the site was occupied by Timothy Roche, a floor cloth dealer.

The original George Harding set up as a tinplate manufacturer in 1835 in White Street, under the sign 'The Original Little Dust Pan'. His stocks were warehoused in the old Marshalsea prison building. During the late C19 and early C20 they also had offices and a warehouse at 207 Borough High Street (since demolished), Nos. 25-33 and 35 Long Lane (demolished) and 22 Tabard Street (demolished), all of which carried around 8,500 household and garden lines.

Japanning is a varnishing treatment for the protection and decoration of household and artistic products. Japanning could take place on almost anything; the most usual bases were tin plate and papier mache, though wood was also used. The products produced ranged from large pieces of furniture to small decorative boxes. Japanning was derived from the east Asian technique of lacquering; oriental lacquerware was produced by the use of natural lacquers which would take a very high polish, and surfaces were highly decorated. When the demand for such wares proved to be more than the Far East trade could provide, Europeans tried to manufacture their own lacquerware. Japanning in England started in the last quarter of the C17. The lacquers that were used in this country were not the natural lacquers of the Far East but substances, mostly based on asphaltum, which were developed for the purpose. Originally, the style was in imitation of the oriental prototype and mostly consisted of a black ground with gold decoration. To this would be added painting in natural colours and, later, thin slivers of pearl. The japanning industry in England went into decline from about the middle of the C19, in part due to changes in taste but largely due to the introduction of electroplating. Some japanning continued into the C20, the products by then mostly utilitarian objects, which were very thinly japanned for protection rather than decoration.

REASONS FOR DESIGNATION: The former hardware merchants' workshop at No. 19 Tabard Street, dating from 1891, is listed at Grade II for the following principal reasons:
* Architectural Interest: an eloquently detailed façade reflecting the nature of the business not only in inscriptions but also iconography;
* Historic Interest: a vestige of a historic industry which was widespread in this part of London in the late C19.

The former hardware merchants' workshop at No. 19 Tabard Street, dating from 1891, was recommended for listing at Grade II for the following principal reasons:
* Architectural Interest: an eloquently detailed façade reflecting the nature of the business not only in inscriptions but also iconography;
* Historic Interest: a vestige of a historic industry which was widespread in this part of London in the late C19.