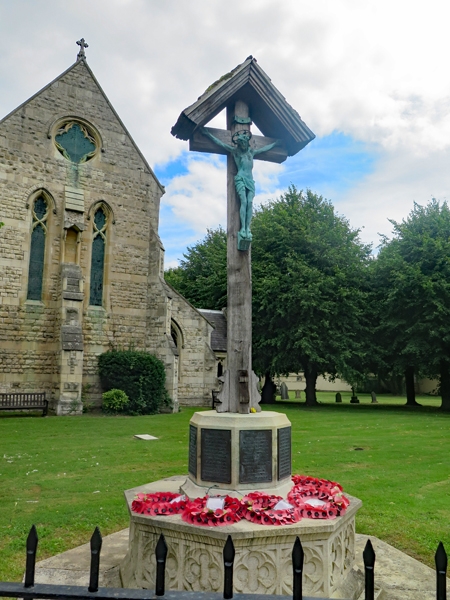 The memorial comprises a wooden Calvary, with a bronze figure of Christ, set on an octagonal stone plinth with bronze plaques. That in turn stands on a wider octagonal stone base with carved quatrefoil decoration to each panel. The bronze panels (introduced in 1995 in place of earlier carved inscriptions) carry the words: REMEMBER YE WITH THANKSGIVING AND HONOUR THESE MEN OF SHIREOAKS WHO GAVE THEIR LIVES FOR KING AND COUNTRY IN THE GREAT WAR OF 1914-1918 AND WORLD WAR II OF 1939-1945, UPON THOSE SOULS MAY GOD HAVE MERCY/ 1914-1918 (24 names) and 1939-1945 (12 names).

The memorial has a flagged surround.

The war memorial, in remembrance of the men of Shireoaks lost in the First World War, was unveiled on 16 May 1920 by Hubert Brownlow, a local resident and ex-serviceman, and dedicated by the vicar, the Revd H Cowgill. It was designed and made by CE Kempe and Co of London. The names of those who fell in the Second World War were added when the memorial was restored in 1995.

Shireoaks war memorial, unveiled in 1920, is listed at Grade II for the following principal reasons:
* Historic interest: as an eloquent witness to the tragic impact of world events on the local community, and the sacrifice it made in the conflicts of the C20;
* Group value: for its proximity to the church of St Luke and the early C19 Community Centre, both listed at Grade II.