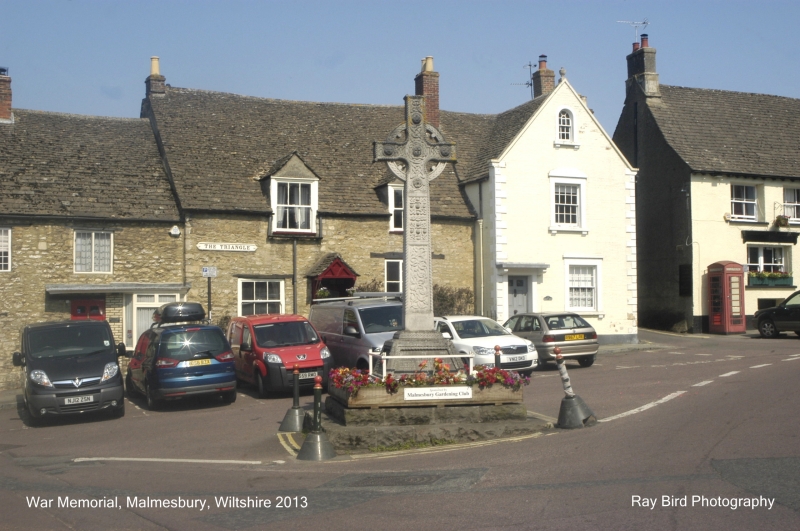 A war memorial cross of 1921 date, designed by Henry Stafford de Bertodano and constructed by Messrs Webb & Son of Chippenham.

DESCRIPTION: a war memorial cross on a three-stepped square base surmounted by a square tapering plinth. The Celtic wheel cross is based on the cross of St Martin on the island of Iona. It has elaborate carved Celtic designs across the cross and shaft. The plinth has moulded relief panels inscribed on the N and S faces 1914 1919/ TO/ OUR GLORIOUS DEAD/ (NAMES). The E and W faces are inscribed with names of the fallen.

The memorial stands at the centre of a road junction and its four corners are protected by painted bollards.*

* Pursuant to s1 (5A) of the Planning (Listed Buildings and Conservation Areas) Act 1990 (‘the Act’) it is declared that these aforementioned features are not of special architectural or historic interest.

The aftermath of the First World War saw the biggest single wave of public commemoration ever with tens of thousands of memorials erected across England. This was the result of both the huge impact on communities of the loss of three quarters of a million British lives, and also the official policy of not repatriating the dead which meant that the memorials provided the main focus of the grief felt at this great loss. One such memorial was raised at Malmesbury as a permanent testament to the sacrifice made by the members of the local community who lost their lives in the First World War.

The war memorial to the men of Malmesbury who fell in the First World War was unveiled and dedicated on 20 March 1921 at a ceremony attended by Lt Col LE Morrice and the Revd Dr Forrest Browne. It was designed by Henry Stafford de Bertodano of London as shown on his drawing of 4 February 1920. The war memorial is shown on the Ordnance Survey Map of 1921. The memorial was restored in 1988.

Malmesbury War Memorial is listed at Grade II for the following principal reasons:
* Historic interest: as an eloquent witness to the tragic impact of world events on this local community, and the sacrifice it has made in the First World War;
* Architectural interest: a well-crafted cross design in dressed Portland, Blue Pennant and Hopton Wood stone;
* Degree of alteration: the structure is unaltered;
* Group value: on a prominent road junction surrounded by listed buildings.