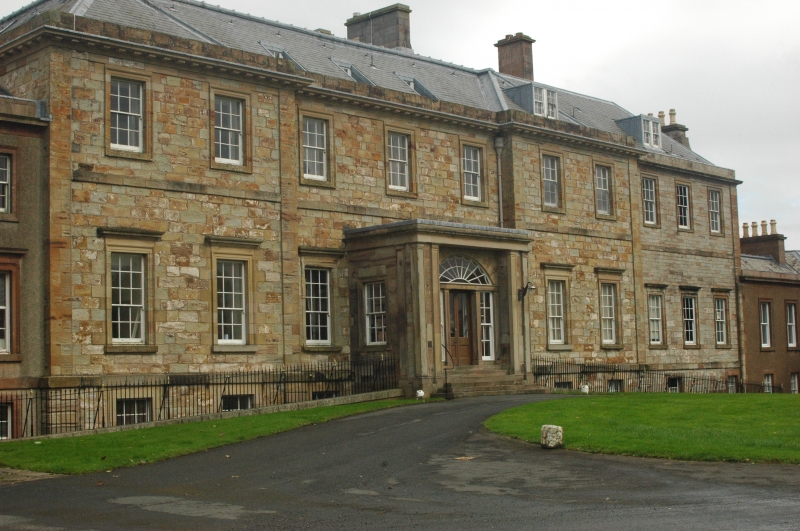 Northwest elevation has near-regular openings, with doorway to basement and two blind windows to right of first floor, bays to right and obscured by west wing. Single-storey west wing with architraved panelled timber door with tall fanlight to left, flanked to right by three windows. Doorway to penultimate bay to right, flanked to outer right by further single window.

The Auchincruive Estate was owned by the Wallace family in the 13th century. There were a variety of owners until the 18th century when James Murray of Broughton sold it to Richard Oswald, colonial merchant and advisor to the British government, in 1764.

Richard Oswald of Auchincruive (1705-1784) was able to purchase the Auchincruive Estate and fund a series of improvements through the profits he derived from the transatlantic slave economy. Oswald made a vast private fortune through merchandise shipping and trading, the procurement and trading of enslaved people, plantation ownership and government contracting. From 1748 he was also the co-owner of the notorious trading fort of Bunce Island in Sierra Leone, used to imprison African people before their forced transportation to the Caribbean and Americas.

Robert Adam is known to have designed a "simple classical house with wings" (Sanderson, 1993) for James Murray, the plans for which survive. However, the Oswald family are responsible for the current house (originally harled), which bears only some resemblance to Adam's plans, and was modified quite substantially. The window arrangement of the entrance elevation is much simplified, the pedimented entrance and Venetian windows being omitted. The quadrant links to kitchen and stable pavilions do not appear to have been built to Adam's design. In the late-18th/early-19th century the east wing was added. In 1784 George Oswald (1735-1819) inherited the estate, and later commissioned the building of the west wing and the raising of the east wing.

The interiors designed by Adam were carried out as intended, some of their fine detailing borrowing from his English commissions such as the thyrsus and ivy in the hall, found also at Shardeloes (Sanderson). The ceilings vary from the beam and panel ceiling of the hall to the geometric ceiling in the drawing room and foliate rococo inspired ceiling in the dining room.

The estate remained in the Oswald family until 1925, when they sold it to a local farmer John M Hannah, who gifted it to the West of Scotland Agricultural College in 1927. The house was renamed 'Oswald Hall'. The building is now occupied as commercial and residential premises and was recently renamed 'Auchincruive House' (2021).