A Category B Listed Building in Carnwath, South Lanarkshire 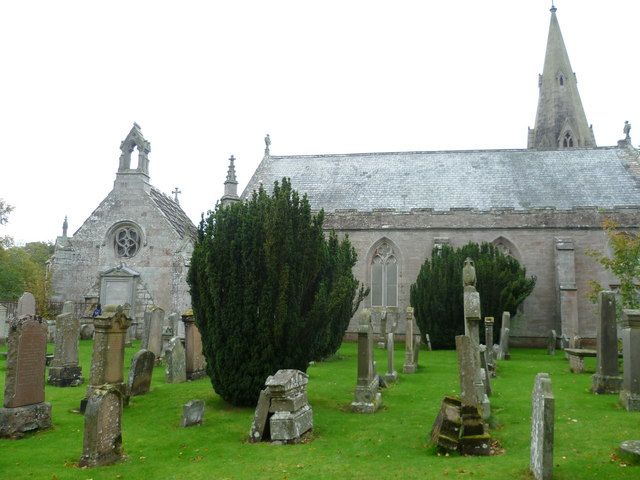 INTERIOR: seen 2013. The church has a fine and intact later 19th century interior decorative scheme with an unusual layout for worship. Symmetrical paired stairs in the entrance lobby leading to a deep U-plan balcony with sectioned pews on 8 round cast-iron columns around three sides of the church and facing a tall timber pulpit with decorative canopy to the centre of the south wall. Fine interior woodwork details throughout including a finely detailed timber roof structure with turned drop detailing and timber boarded ceiling. Timber box pews with the names of local farming families painted onto the pew ends, panelled balcony front and 6-panel doors. Timber panelling to dado height with plain plastered walls over.

Carnwath Parish Church is a good example of a mid to later 19th century Scots Baronial style parish church which has fine stone detailing and which was designed by a prominent Scottish architect of the period. It is an unusual and complex design externally and internally it has an unusual plan form with the pulpit positioned to the south (long) wall with seated balcony around three sides. The church and the surrounding graveyard also make a strong contribution to the streetscape of the village as they sit prominently on high ground and the church is the first building to be seen on entering the village from the west. Carnwath Parish Church is opposite the gates of the former Carnwath House and is associated with the earlier A-listed St Mary's Aisle (see separate listing) which is immediately adjacent to its west gable. The two buildings appear joined because they are so close to each other but are in fact separate and built in such a way that their respective buttresses interweave making it impossible to see daylight between them. The current church is shown on the 2nd edition OS map of (1892-7) and replaced an earlier church on the site. This earlier church is shown on the 1st edition OS map (1856-9) and was square in plan but set further back from the road and also also adjacent to the St Mary's Aisle. This earlier church was plainer in design and is illustrated in a sketch by Alexander Archer held by the Royal Commission on the Ancient and Historical Monuments of Scotland. David Bryce (1803 - 1876) was a prolific and highly renowned Scottish architect whose career spanned the middle of the 19th century and who specialised in Gothic and latterly Scots Baronial style country houses and churches across Scotland. The churchyard contains the Warrack Memorial by architect R S Lorimer (1864-1929). The graveyard and boundary walls are included in the listing for the St Mary's Aisle (see separate listing). Listed building record and statutory address updated 2014. Previously listed as "Carnwath Parish Church".