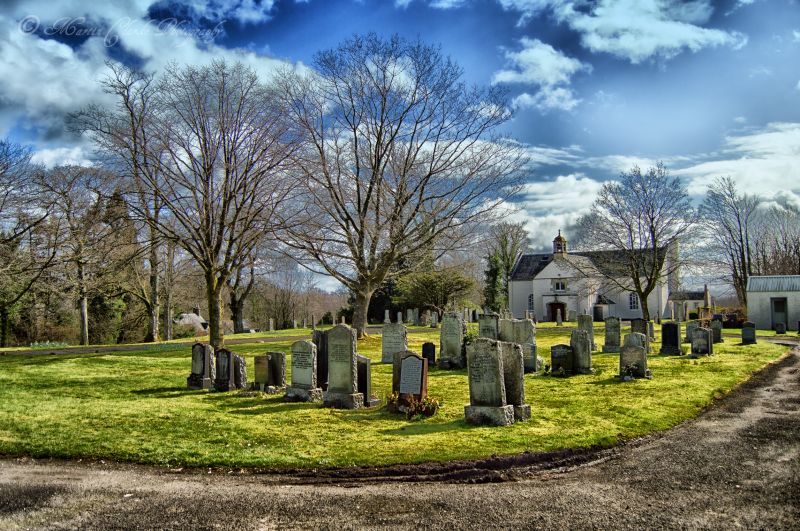 Buchanan Parish Church was designed by John Adam and built by Alexander Gowan, 1761-4. Situated at the centre of a large rectangular gravesyard on an elevated site at the NW outskirts of Milton of Buchanan, the church is aligned E-W with a projecting N laird's aisle, forming a traditional T-plan building with round-arched openings and a moulded eaves cornice. It is an example of the work of a major 18th century Scottish architect.

The symmetrical 3-bay entrance (N) elevation has a projecting gabled entrance wing, slightly remodelled in 1938-9 with the addition of a small flat-roofed canted porch with a key-stoned shallow segmentally-arched keystoned sandstone doorpiece and a similarly detailed rectangular window above; the gable is surmounted by a stone round-arched bellcote (not original, probably later 19th/early 20th century; see Notes) with an ogee roof and cross finial. There is a modest 20th century addition to the NW re-entrant angle, and another to the W gable. The S elevation is 4 bays with round-arched windows. There is a Venetian window in the E gable.

The interior was destroyed in a fire of 1938 and subsequently refurbished by Clarke & Bell & JH Craigie. The main body of the church is T-plan with the communion table and pulpit at the E end. At the W end is a classical pilastered timber doorpiece with a round-arched window above. The short N aisle, which contains the Montrose family pew in a sectioned-off corner, is partitioned from the entrance vestibule by a timber-panelled wall. The entrance vestibule also has a timber stair, with turned balusters and newels, leading to the vestry above, which has 3 multi-pane windows overlooking the main body of the church. The joinery dates to the 1938-9 refurbishment, and includes simple timber pews and pilastered timber panelling to dado height, with revealed rubble walls above (the plaster was not replaced following the fire). The ceiling is coombed, with arch-bracing springing from timber corbels.

Mainly later 19th and 20th century headstones to the N portion of the graveyard; several 18th and early 19th century table tombs and headstones to the S, and a small W plot containing the graves of members of the Graham family, including the 6th and 7th Dukes of Montrose. Near the entrance gates is a pedestal sundial with copper dial (gnomon missing) of 1922, erected in honour of a former minister.

Bounded on all sides by a randon rubble wall. To the N boundary, entrance gateway with wrought iron gates and square-plan ashlar gatepiers with pyramidal copes, double gate to centre flanked by hand gate to either side.

Buchanan Parish Church was built by the Duke of Montrose to replace a chapel near the Old House of Buchanan, which in its turn had succeeded the use of the original parish church on the island of Inchcailloch, which had ceased to be used c1670.

It underwent some refurbishment in 1825 (SRO, GD220/6/88), including the construction of a new belfry of cast iron.