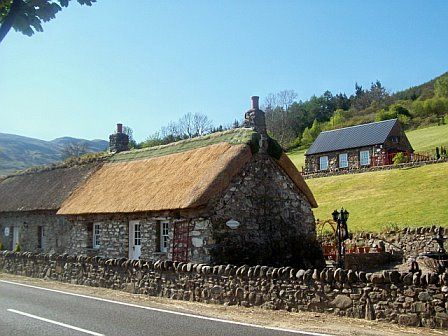 Each former cottage has a central door with flanking windows. Two-leaf timber-boarded door to central cottage and half-glazed timber door to east cottage. 1997 rubble chimney stacks replacing original rendered stacks on east gablehead of each cottage. Although a once common form of vernacular construction, very few cruck-framed cottages now survive. This is a good example of a cruck-framed thatched cottage, occupying a prominent position by the A85.

Materials: random rubble, including some large boulders, mostly at base and quoins. 12-pane glazing in timber sash and case windows. Tay reed thatched roof with turf ridge. Corrugated metal roof to rear addition. During renovation the harl was removed and the stonework pointed and left exposed.

Cruck-framed construction continued until the 19th century, and the building is more likely to date from the late 18th or early 19th century when Lochearnhead was developed as a village of crofts to resettle families from over-crowded 'fermtouns' (see Stewart). The two-bay section at the west end of the building was originally a one-room addition to the west cottage (shown on 1st edition Ordnance Survey map), and was extended in 1997 to its present size.

In 1997 extensive renovations were carried out to the cottage, which had fallen into dereliction and was in poor condition. The cruck frame was rebuilt using, where possible, the original timbers, and is no longer load-bearing. The chimney-piece in the east cottage (now sitting room) was built as part of the renovations, but the one in the west cottage (kitchen) is believed to be original: there are no old photographs of it, but the listed building consent indicates that the existing chimneypiece was to be kept.

Before it was renovated the cottage had a corrugated iron roof over old thatch. In 1997 the cottage was re-thatched with two different types of thatch to distinguish between the two building periods. The east cottage had heather thatch and the rest had marsh reed thatch with a heather ridge. In 2009 the building was rethatched in Tay reed.

The boundary walls, garage and workshop were all built in the late 1990s.

Listed building record revised in 2020 as part of the Thatched Buildings Listing Review.