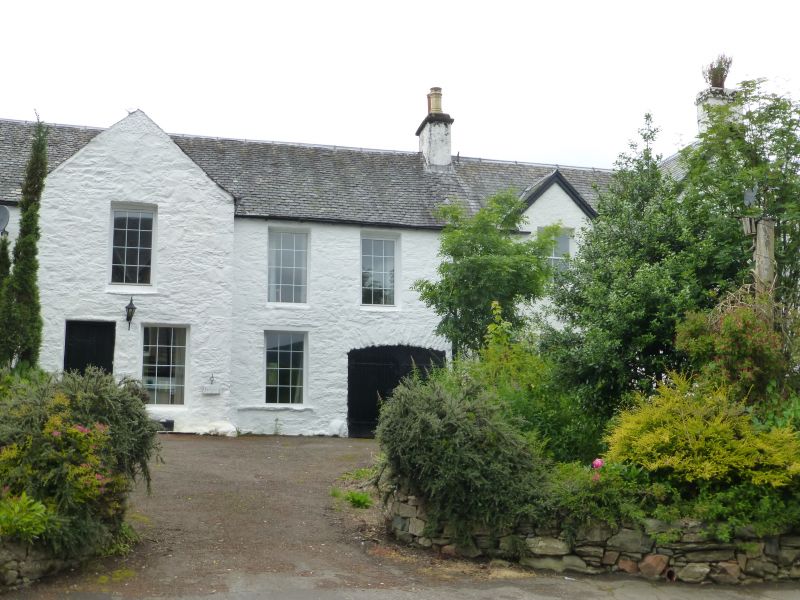 Probably dating from the later 18th century Ashlea and Upper Ashlea (likely to be originally 1 house) are part of a terraced group of 3 houses in this part of the Main Street of Killin (see separate listings for Glengarry and Birchbank) which comprises some of the oldest 2-storey houses in the village. They all stongly retain their traditional architectural character. Ashlea (Upper Ashlea is accessed at the rear) is a 2-storey 3-bay white harl house with a central projecting gable. The house makes a significant contribution to the streetscape of Killin. Ashlea and Upper Ashlea retain a traditional glazing pattern - a rarity now in Killin. Unusually in Killin, but common to Glengarry and Birchbank, it is set some way back from the street.

There is a timber boarded entrance door with a simple 2-light rectangular fanlight above in the projecting gable on the principal (East) elevation. On the flanking bays pitched dormers break the eaves. There is a gable stack on the projecting gable and a thackstaned gable stack to the right and one adjoining the property to the left. To the rear a modern flat roofed extension with an entrance at first floor level provides access to Upper Ashlea.

Ashlea has a simple interior with 4-panel timber doors and a timber chimneypiece with a copper Art Nouveau canopy above the grate.

To the East a truncated wall topped by a hedge runs parallel with the street. To the North a section of higher harled wall separates Ashlea from its neighbour. There is a predominantly piend roofed building at the rear with a timber boarded door which has a timber lined interior and a lavatory.

Part of a B-group with Masonic Lodge and White House and Manse Brae, Breadalbane Cottage, Glengarry and Birchbank.

Ashlea was part of the Breadalbane Estate up until the 1920s and may have been constructed to house estate workers.