A Category B Listed Building in Port of Menteith, Stirling, Stirling 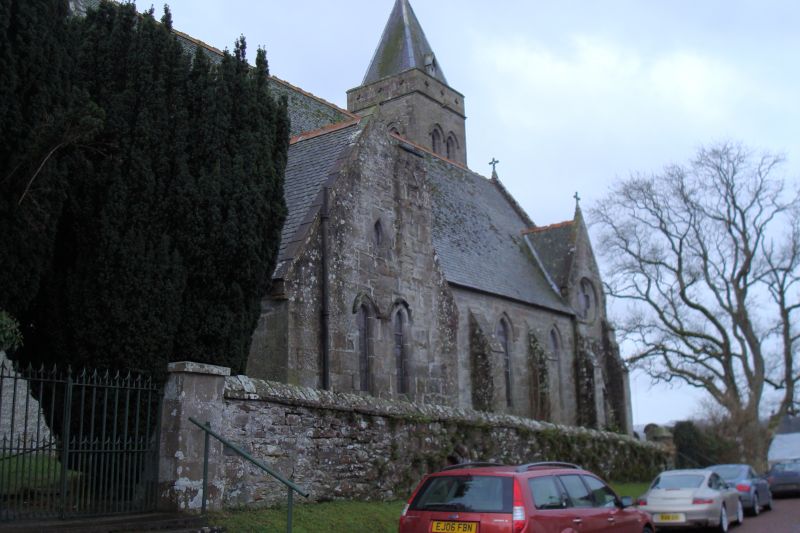 Find accommodation in
Port of Menteith

1876-8, John Honeyman, architect. Early Gothic, rubble-built rectangular church composed of a SW tower with slated pyramid cap, NW entrance, 5-bay nave and vestry to the NE. The windows are hooded lancets except for a large triangular opening to E gable. The church is situated on raised ground on the NE edge of Lake of Menteith, and together with the former manse and the Lake of Menteith Hotel (not currently listed, 2004), forms the heart of the small hamlet of Port of Menteith. Although the present church dates from 1876, there has been a church on this site with links to the nearby Inchmahome Priory since the early medieval period (see Notes).

The church is dominated by a square-plan SW belfry tower with broad clasping buttresses and slated pyramid roof above the parapet. Paired hooded lancets with louvres to belfry to all 4 elevations, where a peal of 8 bells is located. Fine wrought-iron weathercock to apex. The W elevation comprises the tower to right and to the left, gable with 3 hooded lancets to gallery level, 2 smaller lancets below light the entrance vestibule. The main gabled entrance is to the NW: triangular-headed entrance with Gothic arched doorway with colonettes to splays flanked by stepped buttresses, with quatrefoil window to gallery level. The N and S elevations are composed of 5 bays, marked by hooded lancets and divided by buttresses. A gabled vestry is located at the NE corner of the church and advances to the N from main body of the church. 2 narrow lancets with hoodmoulds, vesica above and squat, shouldered chimneystack. Unusually, there is a small arched doorway with timber boarded door in the boundary wall below, which provides direct access between the vestry and the lane. Shouldered, chamfered vestry doorway and single lancet to E return. The E gable is dominated by a large window composed of 3 circled cinquefoils inscribed within a triangular opening. Chamfered band course and clasping buttresses.

Plastered interior with timber gallery at W end supported by cast-iron columns. The ceiling is constructed of arch-braced trusses in stained ash with curved struts above the collars and cross-bracing under the spars. The oak chancel platform with oak pulpit (circa 1905) is placed centrally in front of the E wall on an octagonal stone base, finely carved Late Decorated blind tracery panels. The font is of white marble with onyx pedestal. The organ, in the gallery, is probably by Joseph W. Brook, with pipes gathered in a Gothic screen with cusped ogee arch. Stained glass in geometrical tracery of the E window is by Stephen Adam, 1879, to Sir James and Lady Campbell of Stracathro. Lancets have red and yellow edging. In the vestibule, there are 2 memorial wall tablets: a pink sandstone aedicule to John Elphinstone Erskine of Lochend (died 1887); the other is a pedimented frame in grey sandstone to Matilda Graham (died 1839). Coloured tiles to vestibule floor.

Among the mainly 19th century graves in the churchyard are a few older slabs and table tombs with some gravemarkers dating from the 17th century.

Random rubble boundary wall with copes set on end enclose the churchyard. There are 2 entrances on the N side, which are both accessed by short flights of stone steps. The main NW entrance to the church has substantial ashlar gatepiers with pyramid caps and cast-iron gates. The other entrance to the E of the church is simpler with ashlar gatepiers and flat coping. Simple cast-iron gates are of the same design as those at in the garden at Menteith House, the former manse.

The Parish Church - Churchyard was previously listed at category B in its own right. The Graham of Gartmore Mausoleum is situated in the churchyard and is listed separately.

There has been a church on this site for centuries. Port of Menteith Parish Church was one of 4 dependent on the Priory of Inchmahome, on the island of that name in Lake of Menteith (a Scheduled Ancient Monument). Although Port of Menteith itself was never more than a very small village, it was given Burgh of Barony status by James III in 1466. Honeyman's 1876 church replaced an earlier building dating from 1771, of which there are photographs in the church.