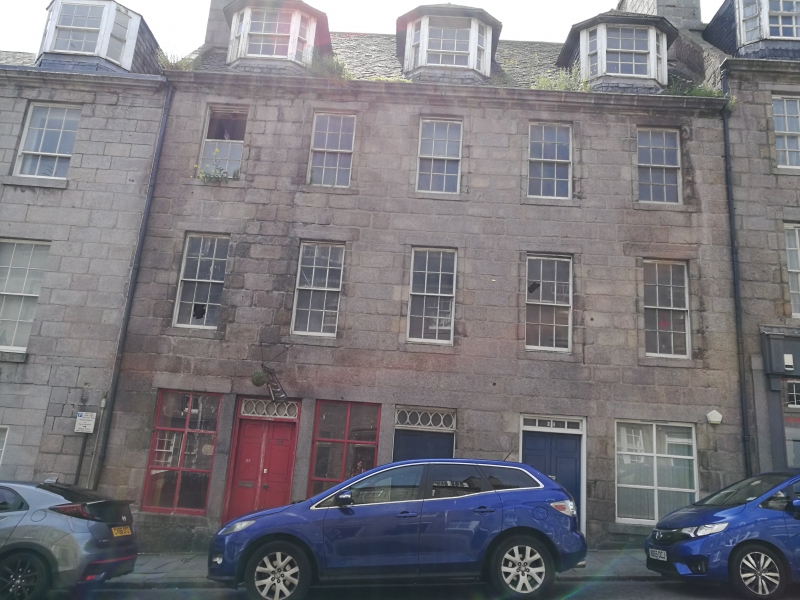 INTERIOR: 18th Century panelling to first floor rooms. Converted to five modern flats in 1990 (maintaining the original layout of the rooms). Half oval staircase to rear. Ornate plaster work to arched alcoves at reception rooms. Moulded cornicing. Two Tuscan order columns reclaimed from houses demolished to make way for the widening of Virginia Street are reused in the porch facing into the garden, clearly visible from Virginia Street.

Nos 28-32 is a fine example of the early Classicism seen throughout Marischal Street's lengthy run. The building contains a good interior with 18th Century timber panelling and plasterwork furnishing the 1st floor rooms. The house was built around 1780 by William Dauney, architect and uncle of Archibald Simpson (foremost architect of Classical Aberdeen). It was built for William Young who went on to become Lord Provost from 1811 to 1815. Marischal Street (designed by William Law, 1767) is of considerable historic interest in terms of the early development of Classical Aberdeen and the refined classical styling of Nos 28-32 forms a significant part of the Street's lengthy run. The building was constructed at some point between 1789 (not shown on Alexander Milne's map of that date) and 1821 (shown on John Woods map).

Formed on the site of the Earl Marischal's lodging and linking Castlegate with the Harbour below, Marischal Street is carried on embankments down a partly vaulted incline. It is the earliest example of this type of construction in Aberdeen, anticipating the larger scale development of Union Street and Edinburgh's South Bridge by 20 years. Originally having a fine granite bridge half way down, this was demolished and replaced in 1983 along with adjacent Nos 36-38 and 37-39 to allow the widening of Virginia Street below.

The buildings occupying the Southern half of the street are attributed to William Smith (d.1812), father of John Smith (the renowned Aberdeen architect - b.1781) and are generally grander and more varied. The street as a whole retains much of its refinement and original character despite the gradual move from domestic to commercial ownership throughout 19th century. It is thought to be the first street in Aberdeen paved with square granite sets.

Part of A Group with 3-60 (Inclusive Nos) Marischal Street.