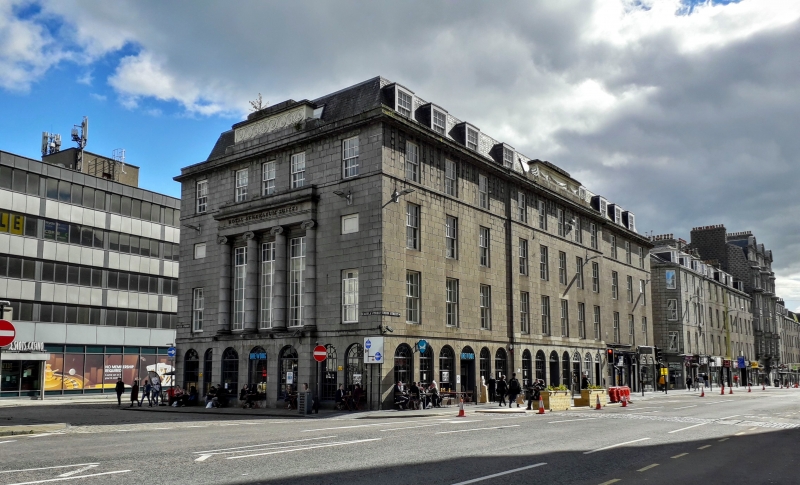 One of the early classical buildings to be built on Union Street this large and impressive building was designed by the renowned local architect Archibald Simpson and is situated at a particularly important junction in the city. Its Ionic columned elevation provides a dominant terminating vista to the West of the Castlegate. The grand Ionic columns on the East elevation originally indicated the position of the former library. The simple classical style is typical of granite buildings of this period before sophisticated cutting techniques were developed. Planned as the major thoroughfare in an increasingly wealthy and confident city, Union Street was a bold and confident project which required major engineering to complete.

Originally called Union Buildings, and then The Athenaeum, the Eastern section of the building was known for its large and sumptuously decorated Reading Room, positioned behind the Ionic columns. Converted into 'Jimmy Hay's' restaurant in 1888, it remained as such until a fire gutted the building in 1973. The building was restored in 1979-80.

Union Street developed after 1794, when a town council meeting asked the engineer Charles Abercrombie to find a way to connect the original steep, muddled Medieval streets of Aberdeen to the surrounding countryside. His plan was for two streets, one of which would run from Castlegate to the Denburn and the other which would run from the Castlegate to the North of the town. The former became Union Street. This was a particularly difficult project to complete as the street had to cut through St Katherine's Hill at the East end and be built on a series of arches culminating with a large bridge at the Denburn. The street was to be lined with classical buildings, but the initial idea of having a long, uniform classical design that each new house would have to conform to was abandoned, as it was realised that different purchasers would require some control over the design Some variety was therefore conceded to. This variety had, however, to conform to the 'uniformity and regularity of the street' and that between each crossroads, the houses had to be the same height, the same number of storeys (4) and have the same pitch of roof.

Archibald Simpson (1790-1847), along with John Smith, was one of the major architects involved in designing the expanding nineteenth century city of Aberdeen. A native of Aberdeen, he practised predominately with the North East of Scotland. He designed many of the important works in the city including St Andrews Cathedral, The Music Hall and 29 King Street (see separate listings).