A Category A Listed Building in Aberfeldy, Perth and Kinross 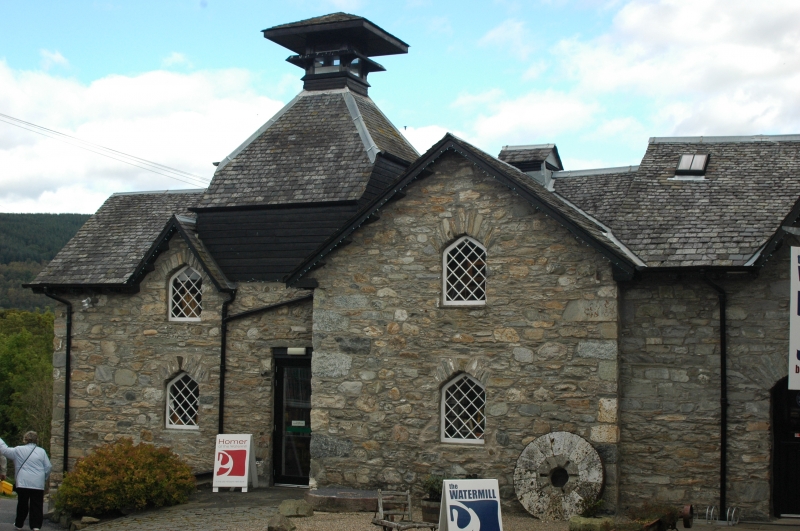 Southwest (Entrance) elevation: broad door in bay to right of centre with dormer window above breaking eaves, advanced gable to outer right with door to ground and windows at attic floor, two further windows to each floor on return to left, those to attic breaking eaves as above, small square-headed door under relieving arch in re-entrant angle beyond. Slightly advanced gable to left of centre with timber-blocked opening in gablehead, set-back bay to outer left with square-headed door in re-entrant angle to right and timber-blocked opening above breaking eaves into dormerhead; timber base of kiln housing adjoining eaves on right and giving way to swept pagoda roof with unusual stepped top.

Interior: converted for use as bookshop, gallery and café around 2004. Attic floor with Milson dresser for cleaning raw grain milling floor with two pairs of 1.5 ton French burr stones and basement (with vaulted ceiling) housing great spur wheel of beechwood.

Dating to 1826, Aberfeldy mill is an outstanding example of an early 19th century watermill. Once common across Scotland, water powered mills of the late 18th and early 19th century are now rare, with the majority demolished or substantially altered. Although no longer on use as a mill, Aberfeldy has been converted in the early 21st century and retains its early 19th century form and key industrial features including its water wheel, kiln ventilator and a number of items of internal machinery. The survival of the associated machinery is also very rare.

Mackay notes that the mill is dated '1826' on a gable (obscured by brick extension) facing the burn, and on the inside. A mill was built on this site during the 1740s, and subsequently purchased from the Earl of Breadalbane in 1771. The introduction of combine harvesting led to the need for instant drying, thus the oil-fired Walworth kiln was installed in 1953. Fitting the kiln necessitated removal of the kiln roof. The mill lade runs some 150m from The Birks, partly underneath the town.

The mill was closed in 1983 and subsequently restored by Tom Rodger, a retired miller from Cupar, who reopened it as a working mill in 1988. The mill closed in 2000 and fell in to a state of disrepair. The building was renovated around 2004 as a book shop, gallery and café.

Supplementary information in the listed building record was updated in 2019.