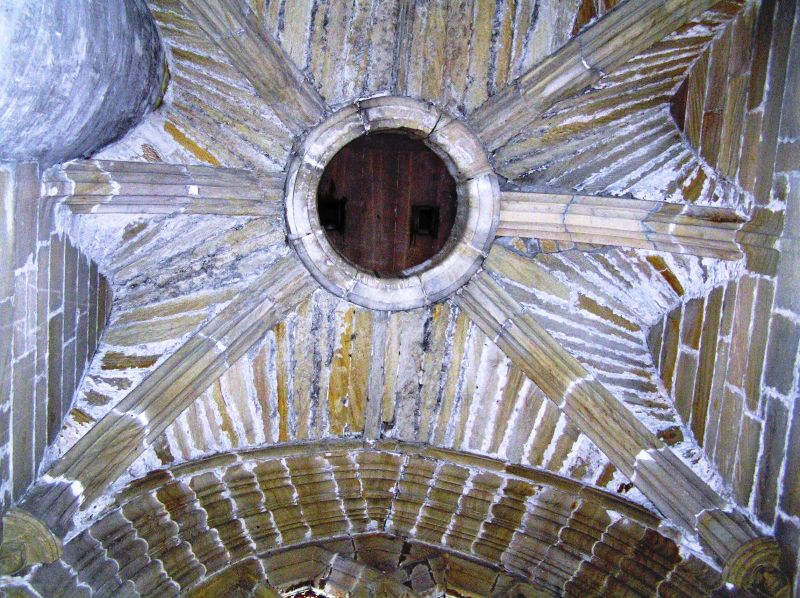 S ELEVATION: aisle bays divided by stepped flying buttresses (dated 1625) with gableted heads (that to outer left is taller); frames for armourial panels to 2 of central ones. Entrances to outer right bay and 2nd from left. Recessed round-arched doorway stepped forward in 4 stages with nook shafts with elaborately carved capitals to jambs to inner 2; circular bases on square plinths to shafts; voussoirs of arch decorated with chevron motif, apart from outer one, which is decorated with rosettes; abaci/impost bands carved with scrolls. Late 20th century 2-leaf boarded and studded timber door. Recessed round-arched entrance to 2nd bay from left stepped forward in 5 stages, each with ribbed voussoirs and chamfered jambs. Panel bearing arms of 1st Earl of Dunfermline and date 1607 to right. Lean-to mausoleum (Wardlaw Vault) to 2nd bay from right; arrowslit to centre; stone flagged roof. Entrance to right return created in 1905 when vault reduced in size; panel above bears Latin inscription, Wardlaw coat of arms and date 1616. Recessed round-arched aisle window to all except outer left bay; voussoirs stepped forward in 4 stages; single nook-shaft with carved capital to each jamb; circular base on square plinth; chevron and billet decoration to voussoirs; abaci/impost bands. Blocked triangular-headed window divided into pair of lancet lights (copied from pair of altered windows on N elevation in 1840's) to triforium; flanking nook-shafts. Round-arched window to clerestory set back above. Gableted buttress to left of tower to outer left; glazed arrowslit above to right; small window to right return. Remains of Romanesque pilaster to upper right side of tower. Louvred lancet window to upper stage of tower (for full description see W END: S TOWER).

Property in care. A-Group with Dunfermline Abbey, New Abbey Parish Church, Gatehouse, Remains of Dorter and Reredorter, Frater Range, Palace and Kitchen and Entrance Gateways and Boundary Wall (see separate list descriptions). Well preserved nave of 12th century abbey church. The church was begun in 1128 when David I had the Benedictine priory established here circa 1070 by his mother, Queen Margaret, made into an abbey. It was consecrated in 1150. The E end was rebuilt shortly after and the bodies of Malcolm III and the newly-canonized Queen Margaret reinterred in it (that of St Margaret being later moved to a separate shrine further E). It is thought that the masons responsible for the earlier stages of the nave (including the eastern end with its cylindrical piers with incised spiralling and chevron decoration) came from Durham (there are similarities to the cathedral that was being constructed there at around the same time). After the abbey's dissolution in 1560 the nave continued to be used as the parish church of the burgh. The abandoned E end eventually collapsed in various stages. The present parish church (see separate list description) was built on the site of the E end in 1818-21; its easternmost bay was built to harmonize with the existing nave bays and effect a smooth transition between the 2 buildings. In 1845 care of the nave was taken over by the Government.