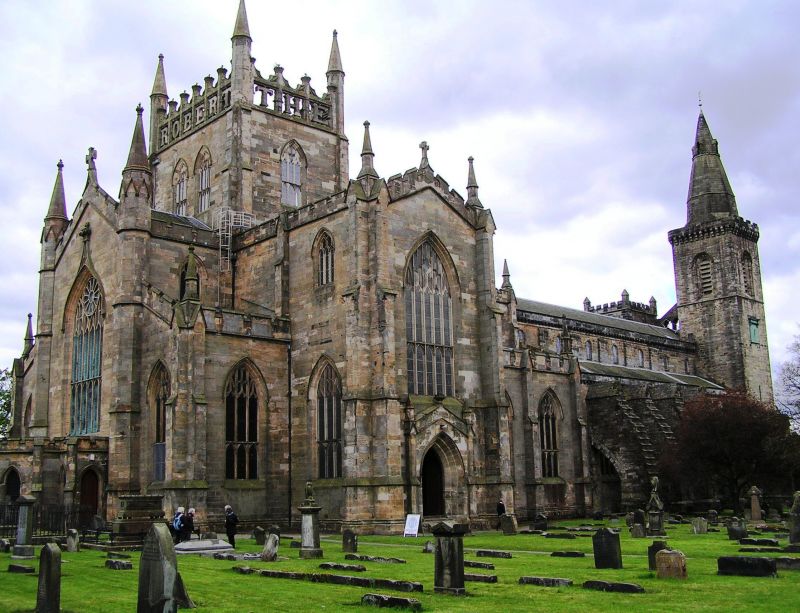 E END: large E window incorporating traceried rose; carved heads as hood-mould stops; cusped panel rising above like head of ogee with sprocketed finial. Similar trefoiled panel at apex of gable above; surmounted by cross finial. Low pentagonal apse of sessions house projecting from rectangular section below; lancet window to all except outer flanking bays. Entrance with studded panelled timber door to outer right bay. Flanking hexagonal corner towers; both with 4 band courses and course of pendant triangles; surmounted by hexagonal conical pinnacles with crocket finials. Flanking aisles, each with window. Buttresses set at right angles at E corners of chancel; pinnacle comprising hexagonal shaft surmounted by hexagonal cone with crocket finial in between. Single window to either side of chancel aisle; one set back to clerestory.

CROSSING TOWER: single window to each side over transepts; pair of windows to each side over chancel/nave. Pair of buttresses at right angles at each corner of tower; each with pinnacle comprising hexagonal shaft on square base surmounted by hexagonal cone with crocket finial. Balustrade of open stonework lettering bearing words 'KING ROBERT THE BRUCE'; crown finials to hexagonal dividing balusters.

Ecclesiastical building in use as such. A-Group with Dunfermline Abbey, Nave, Gatehouse, Remains of Dorter and Reredorter, Frater Range, Palace and Kitchen and Entrance Gateways and Boundary Wall (see separate list descriptions). Built on the site of the choir and transepts of Dunfermline Abbey church, its westernmost bays (housing the stair vestibules) are designed to blend in with the extant nave. The open stonework lettering at the apex of the tower is thought to derive from that at Hill House, an earlier 17th century laird's house on Limekilns Road (see separate list description). A significant building by an important architect.