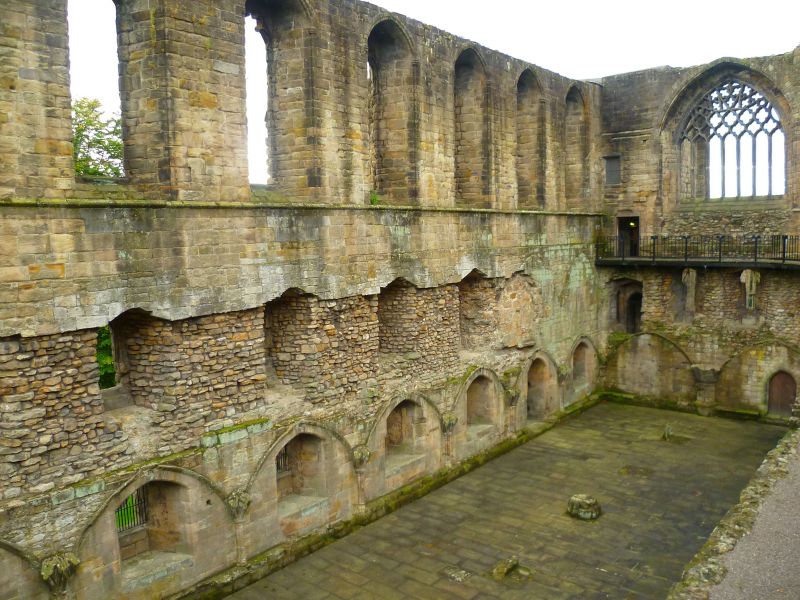 W ELEVATION: pair of lancet windows to right to 1st floor. Large moulded arched window with reticulated tracery above. Adjoins gatehouse to right. Semi-octagonal tower to left; divided horizontally by 3 band courses; arrowslits to 3 W sides of 1st stage; one to each of upper stage. Octagonal cap-house surmounted by spire at apex; round-arched opening to SW. E side of tower is partially decayed.

Building is a roofless ruin with no extant glazing.

Property in care. A-Group with Dunfermline Abbey, Nave, New Abbey Parish Church, Gatehouse, Dorter and Reredorter, Palace and Kitchen and Entrance Gateways and Boundary Wall (see separate list descriptions). A Benedicting Priory was established in Dunfermline in around 1070 by Queen Margaret, wife of Malcolm III. It was upgraded to an Abbey by her son, David I in 1128. In 1304 the monastery buildings were partly destroyed by Edward I during the Wars of Independence. The buildings were subsequently rebuilt, mention being made of a royal contribution to the erection of the frater block in 1329. The frater range is particularly notable for tis pulpit and finely traceried W window.