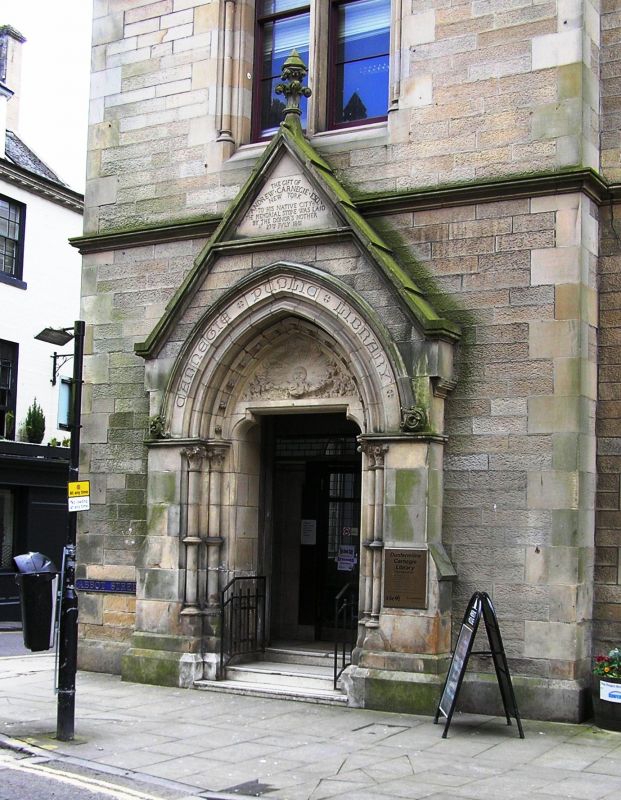 Mainly 3-pane timber sash and case windows to original section; single 2 and 3-pane metal frames with pivot sections to extension. Grey slate roofs where visible. Pair of gablehead stacks to S of extension (one harled) and one with projecting flue and moulded cornice to W of original section; narrow ridge stack (an addition) to E; round cans.

INTERIOR: glazed tunnel vault to part of extension. Half-turn main staircase to early 20th century extension with decorative wrought-iron baulstrade by Thomas Hadden (to architect's design). Timber panelling with carved decoration including Jacobethan mantelpiece to S of main staircase may have been moved from original section.

The first of the public libraries in Scotland to be donated by Andrew Carnegie. It was built after the Town Council had agreed to adopt the Free Libraries Act, which enabled councils to levy a rate of one penny to finance the library service. The initials JCW and AC carved on the exterior would appear to refer to J C Walker (the architect) and Andrew Carnegie.