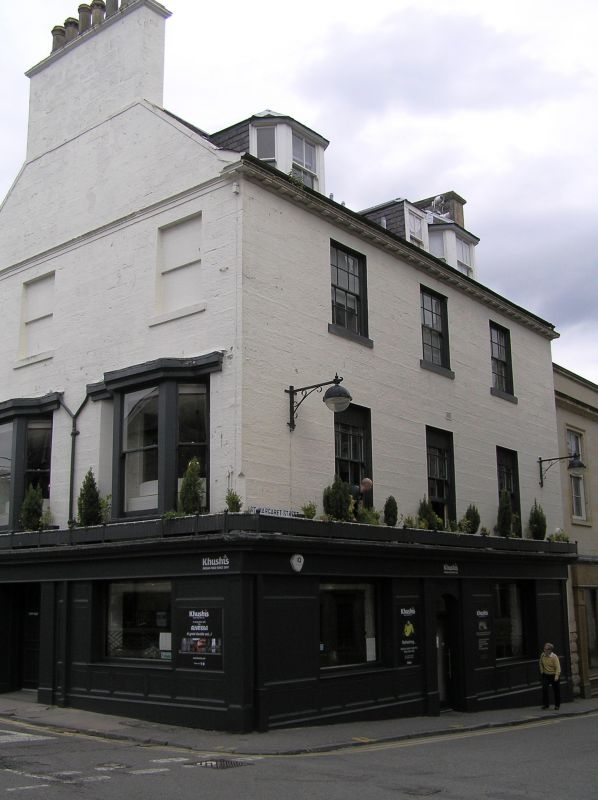 N (CANMORE ST) ELEVATION: architraved entrance with rounded reveals to left of main block; panelled 2-leaf timber door. Window to left. Timber fascia board above wraps around St Margaret St elevation to right. Pair of recessed canted oriel windows to 1st floor of original block; pair of blocked windows above. Later wing adjoins to left. Entrance with timber door with rectangular fanlight to right. Window above and one to outer left. Pair of windows with joined cill to left of 1st floor. Coped boundary wall with 2 entrances adjoins to left of ground floor.

Retains a well-preserved street frontage to upper floors. An early 20th century photograph show it to be unaltered externally (apart from window frames) since this time. It bears the name St Margaret's Hotel on the photograph.

Two blocked entrances in the cellars of No 1 Canmore Street are thought to lead to a buried medieval passageway, or vennel, which may extend in an easterly direction as far as No 29 Canmore Street. Little detailed evidence is currently available, but there may be two distinct underground areas, known as 'Between the Wa's' and 'The King's Sewer'. The structure is understood to follow a course which lies underneath the properties at Nos 1, 7, 25, 27 and 29 Canmore Street (see separate listings). There is also a stretch of abbey precinct wall (between Nos 21 and 25 Canmore Street) which is a scheduled monument.