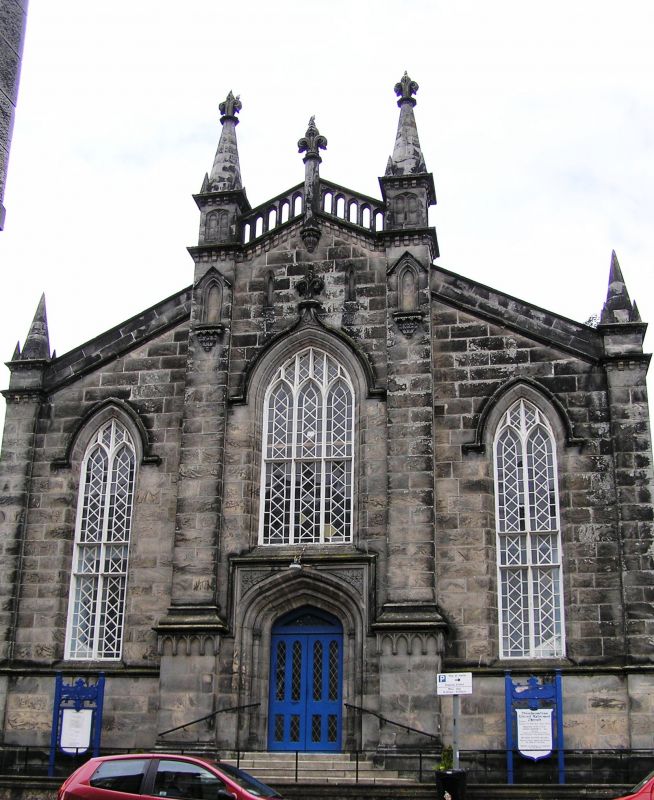 S (PRINCIPAL) ELEVATION: central entrance bay with flanking pilasters; each with band of pendant mouldings overlapping pedestal and niche with moulded bracket at apex. Band course wraps around entrance as hood-mould; deep moulded reveal incorporating pair of columns with foliate heads; 2-leaf panelled timber door with pointed diamond-glazed fanlight. Ogee-arched hood-mould with fleur-de-lys finial to window above; flanking blind arrowslits. Balustraded parapet to gable above cut through at apex by circular shaft with bracketed base and crocketed finial. Bracketed projecting base to balustrade and flanking pinnacle pedestals; latter with recessed Tudor-arched panels to each side. Bracketed projecting bases to octagonal pinnacles with crocket finials; miniature obelisks at base corners. Upper band course parallel to sloping roofline to flanking bays; corner pilasters to outer edges; each with pair of bracketed projecting bases at apex; upper one surmounted by obelisk pinnacle with miniature obelisks at base corners.

E AND W (SIDE) ELEVATIONS: entrance beneath truncated window to pilastered southernmost bay to each side; band course wraps around each as hood-mould; 2-leaf panelled timber door. Flanking pilasters; each with pair of bracketed projecting bases at apex; upper one surmounted by obelisk pinnacle with miniature obelisks at base corners. Later entrance porch to northernmost bay of W side; lean-to roof; entrance to right return.

Ecclesiastical building in use as such. Of particular interest for its surviving glazing pattern and complete interior.