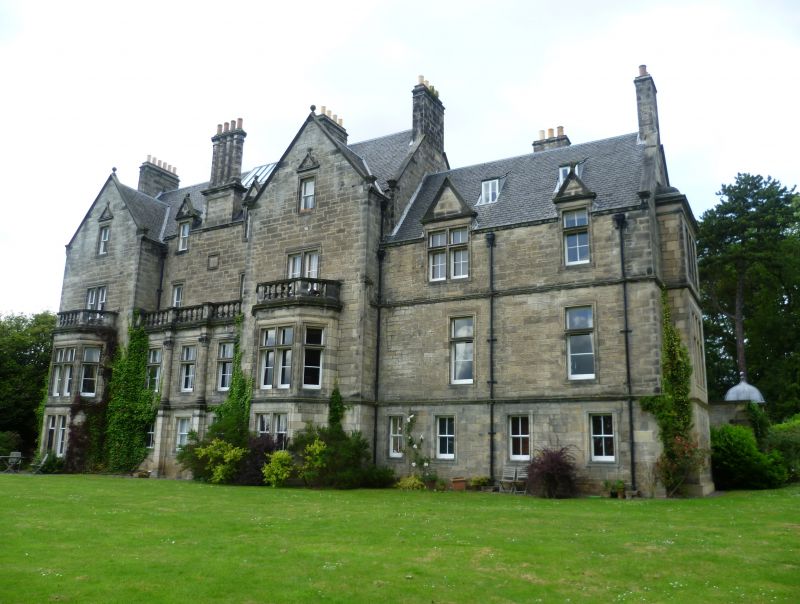 N (ENTRANCE) ELEVATION: square-plan flat-roofed entrance porch more or less to centre of main building, projecting across entire width of remodelled E wing of original block. Steps (with low flanking panelled walls at apex) up to pedimented entrance with architrave carved with thistles and with inner roll-moulding; frieze above carved with date (1885) and initials 'H B' (Henry Beveridge); coat of arms with motto 'Dum Spiro Spero' to pediment above. Porch corniced and surmounted by balustrade; window to right return; slightly lower-height wall screening service section adjoins to left; 3 windows to right where flat-roofed section behind adjoins main building; small pavilion with lead ogee roof adjoins to outer left; small window; entrance to left return. Segmental-headed entrance to open passageway to service area adjoins to left return. Pilastered mullioned and transomed sexpartite stair window set back behind entrance porch; pedimented above corniced frieze and with flanking flower finials at base and star-finialled apex. Attic window with roll-moulded architrave and flower-finialled semicircular pediment to gable above. Main body of original block set back to right. Alternate paired and single windows to each floor; paired shallow windows to ground; window centred above; paired windows with moulded architraves (with inner roll-moulding) to 2nd floor; carved panel of coat of arms (of Wardlaw family) in moulded surround (panel apparently replaced/recarved) in between; inserted pedimented breaking-eaves dormer with thistle-head finial above (renewed stonework below indicates position of original; moulded architrave copied from windows below). Circular-plan stair turrets with finialled conical roofs at re-entrant angles to wings to either side; each corbelled out at 1st floor level with arrowhead opening below and windows at 2 upper levels. Former window to each of upper floors to inner returns of wings; all blocked apart from that to 2nd floor to right wing. Closed garderobes project slightly to inner side of 2nd floor to each wing, adjoining stair turret. Pedimented entrance with inner roll-moulding to architrave to inner return of right wing; pediment carved with foliage and initials 'S H W' (Henry Wardlaw; 'S' possibly for Sir) and surmounted by star finial; timber door with lugged panels; iron yett behind. Former identical opposite entrance to left wing replaced with late 19th century window. Window to each floor to projecting gable end of right wing; that to 1st floor blocked; that to ground floor enlarged. 1885 extension set back slightly to left of left wing. Mullioned bipartite secondary stair window to 2 upper levels to right. Pedimented breaking-eaves dormer with thistle-head finial above. Window below to left. Flush gabled section adjoins to left (coping scrolled at apex); 2 windows to ground and 1st floors (those at ground floor set back behind screen wall with entrance to service quarters with roll-moulded surround to flat-roofed section at right angles to right). Flower-finialled pedimented window centred to 2nd floor; arrowhead opening to gable above. Mid 20th century section set back to outer left.

S ELEVATION: rebuilt symmetrical 5-bay elevation of original block to left. Central 3-bay section set forward at lower 2 floors surmounted by balustrade; each bay framed by pilasters at ground floor and attached Corinthian columns (surmounted by entablature) at 1st floor; window to each floor to each bay; those to 1st floor transomed bipartites. Windows set back to outer bays to upper floors; those to attic star-finialled pedimented breaking-eaves dormers; blank panel centred below. Gable end bays (extended from wings) project to either side; each with thistle-head finial; lower 2 floors canted at centre and surmounted by balustrade; mullioned bipartite to outer face to ground floor; canted mullioned and transomed 8-light window above. Window to each floor above; mullioned bipartites to 2nd floor; pedimented windows with flower finials to attic. 2-bay 1885 addition set back slightly to right; band course to 1st floor. Paired windows to each bay to ground floor. Window to each floor to each bay, apart from to ground floor with paired windows to each bay; transomed bipartites to 1st floor; pedimented breaking-eaves windows to 2nd floor; that to right is transomed bipartite with flower finial; that to left is mullioned and transomed quadripartite; attic dormers with catslide roofs above. Mid 20th century addition adjoins/projects to outer right.

Predominantly 4, 6 and 8-pane timber sash and case windows. Grey slate roofs. Gablehead stacks to either side (E and W) of main body of original building (ridge stack in between) and to original gable ends of 2 wings (N side); replacement wallhead stack with panelled base and defined flues to S; 2 gablehead stacks to 1885 section (N and E sides); mainly coped throughout; that to main body of original section have band courses; replacement to S is corniced with frieze; round cans. Mainly late 19th century cast-iron rainwater goods; some hoppers with embossed patterns.

B-Group with dovecot to NE and former East Lodge (see separate list description). An important example of early/earlier 17th century symmetrically planned house built in the style favoured by the King's Master of Works, Sir James Murray. Its layout is very similar to that originally employed at Murray's house, Baberton in Midlothian in the 1620's (see separate listing, City of Edinburgh Council). It also retains some fine internal fittings from the late 19th century when it was remodelled/extended. The Pitreavie estate was purchased by Henry Wardlaw of Balmule, Chamberlain to Queen Anne of Denmark, in 1608. He was knighted in 1613 and created a baronet of Nova Scotia in 1631. It would appear (especially given the initials over the main entrance of the original block) that the house was built for him. The star motif which appears on finials on the exterior was the crest of the Wardlaw family. By the early 18th century the house had passed into the possession of the Blackwood family. It had lain empty for many years when it was purchased in 1884 by Henry Beveridge (one of the damask-weaving family which founded the St Leonard's Works in Dunfermline), who had it altered and extended the following year. In 1938 it was purchased by the Air Ministry and became the headquarters of 18 Group Coastal Command. It remained in use by the Ministry of Defence until 1996, following which the estate was sold for development. Currently (1999) housing is being constructed on the surrounding land and the house awaits possible re-use as a hotel. An early 18th century dovecot belonging to the house still stands to the E (see separate list description), adjacent to a later stable block. An 1890's Japanese water garden to the S E is planned to be restored. A 17th century sundial and entrance gateway described in the RCHAMS Inventory are no longer in existence. The sundial was moved to the garden of Inveresk Lodge in East Lothian (see separate list description for Inveresk Lodge, 24 Inveresk Village, Inveresk Parish). During the Civil War, the Battle of Pitreavie (1651) is thought to have been fought in the grounds around the castle.