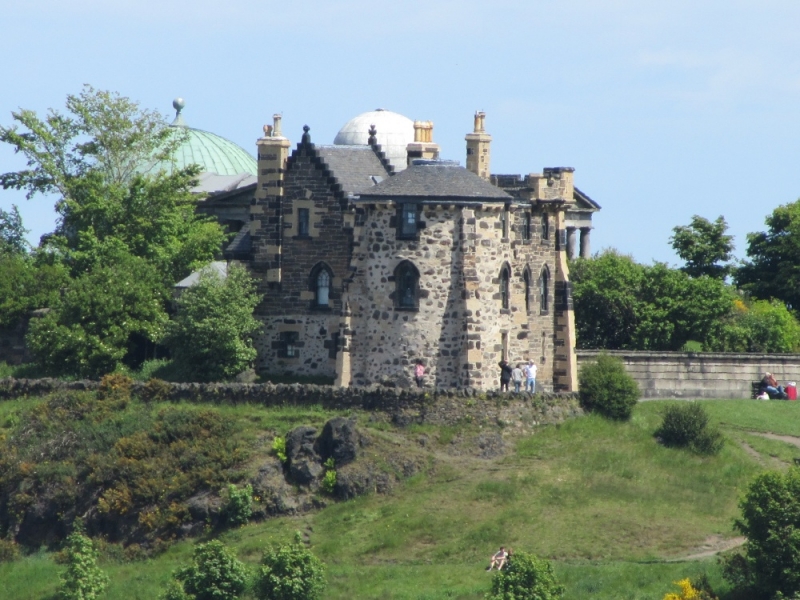 The City Observatory is of great importance for several reasons. It is an excellent example of the work of W.H. Playfair, one of Scotland's leading architects in the early nineteenth century; it is also the only observatory he designed. It is a well-known landmark in Edinburgh and is a vital component in the group of buildings on Calton Hill which are both architecturally and culturally significant in the history of the city and the nation. It is also highly significant in the history of astronomy and timekeeping in Scotland.

The City observatory was commissioned by the Astronomical Institution (founded 1812). They wished to build an observatory which could be used for scientific research, form a base for the establishment of an accurate public time service for Edinburgh and Leith, and create a 'popular observatory' where members of the Institution could go to conduct their own experiments and research.

W. H. Playfair (whose uncle, James Playfair, was the first President of Institution) was awarded the commission, although at least one other scheme, by James Jardine, had been put forward. Playfair initially drew up a grand, Corinthian scheme, but it was the simpler Tuscan Doric that was finally settled on. Meridional slots (continous narrow apertures of which different sections can be opened and closed independently by means of slatted shutters) to the roofs and north and south elevations of the west and east wings allowed an almost 180' viewing axis for the astronomical instruments used in these wings. The Edinburgh meridian runs through the meridional slot of the east wing. The interior consisted of a square central hall with 2 pairs of Greek Doric columns to each side (single columns at corners), forming 3-bay screens. To the North and South walls, the columns were engaged set in partition walls forming the Observer's Room in the north wing, and the entrance lobby, stair hall and 'room for small instruments' in the south wing. The west and east walls were left open, with the Transit Room (east wing) and Mural Circle room (west wing) separated from the central room by wire netting. At the centre of the inner room was a solid pillar of stone (extant, 2002), founded on bedrock and independent of the surrounding structure, passing through the ceiling into the dome where it supports the astronomical instrument.

The foundation stone was laid in 1818 and the building completed in 1822, when it was named 'The Royal Observatory of King George IV'. However, it was not until the early 1830s that funds were available to install the major instruments. The carved stone plaque on the west wing commemorates Thomas Henderson, the first Astronomer Royal, and the first person to measure the distance of a star (Alpha Centuri). The inscription reads: 'In memory of Thomas Henderson FRSS L&E HM Astronomer at the Cape of Good Hope 1832, afterwards Astronomer Royal for Scotland and Professor of Practical Astronomy in the University of Edinburgh 1834-1844. Born 1798. Died 1844. Interred in the Greyfriars Churchyard.'

Following Henderson's death in 1844, Charles Piazzi Smyth was appointed Astronomer Royal in 1845. It was Smyth that supervised the establishment of the time-ball on the Nelson Monument (see separate listing) in 1852/3. It gave a visual signal that enabled the captains of ships anchored in the Firth of Forth to set their chronometers accurately without coming ashore. The time ball?s mechanism was connected by an underground wire to a mean time clock in the City Observatory. Just before 1pm, the ball would be raised, and then exactly on the hour a signal was sent electrically via the wire, causing the ball to drop. In 1861, the 'one o'clock gun' was installed at Edinburgh Castle, to provide an audible time signal in case bad weather prevented the ball being visible. The gun's clock was connected to the clock on Calton Hill by a 4,020-ft overhead wire. The time ball is no longer triggered automatically, but manually, by an operator who watches for the puff of smoke from the gun at the Castle.

In the 1870s, Piazzi Smyth replaced the original dome with a larger one to accommodate new equipment. By 1896, it had been decided to move the Royal Observatory out of the smog of the city to Blackford Hill. The City subsequently took control of the observatory on Calton Hill, renaming it the City Observatory. Between 1895 and 1898, the interior of the Observatory was overhauled by the City architect, Robert Morham, who also designed the City Dome, at the NE corner of the compound, in 1896 (see separate listing). In the late 1940s the Mural Circle instrument was removed the interior was again remodelled; the east and west wings were partitioned off to form separate rooms and the surrounding paired columns were reduced to single engaged columns.

The Transit Instrument and associated equipment, including a chronograph and longcase regulator clock, remain in the Transit Room (east wing). The 8.3ft Transit instrument was made by Repsold and Sons of Hamburg, circa 1833; its Reversing Carriage and rails, striding level, observer's chair and mercury trough are also extant. The astronomical instrument housed in the dome is the McEwan telescope, presented in 1896.

As the largest dome on Calton Hill, the City Dome is a significant skyline feature and also has value as part of the history of the astronomical developments on Calton Hill. The City Dome was built to house a 22" telescope (made by J. Buckingham) which was too large to be used in Playfair's Observatory. The telescope remained there until 1926, when it was dismantled and the lens put on display in the Royal Museum of Scotland. Following this, the dome appears to have fallen from regular use, and by the 1950's was in a severe state of disrepair. The later 20th century saw the external and internal repair and refurbishment of the dome; a suspended ceiling conceals the interior of the dome and the building is currently (2002) fitted out as a lecture theatre and auditorium.

The Cox Dome is a good example of a simple timber astronomical dome and has value as part of the history of the astronomical developments on Calton Hill. The dome, which first appears on the 1908 OS Map, is believed to have been built to house an equatorial telescope which may have been donated Robert Cox MP who had a private observatory at Murrayfield. Originally, the timber drum rotated on a track around the top of the base plinth, but this mechanism no longer functions. The Dome is not currently (2002) used for astronomical purposes.

The Tweedie Dome has value as a good example of a wooden framed domed observatory, and also as part of the history of the astronomical developments on Calton Hill. The Tweedie Dome first appears on the 1896 O.S. Map. The timber dome is split horizontally at mid-height level, enabling the top half to rotate. The Dome is not currently (2002) used for astronomical purposes.

The Crawford Dome is of interest due to its classical detailing and its significance in the history of astronomy on Calton Hill. It is believed to have been built to accommodate a telescope donated by Lord Crawford. Lord Crawford?s donation of books and equipment from his private observatory at Dunecht assisted the establishment of the new Royal Observatory on Blackford Hill by compelling the government to provide funding for new buildings there. The walls of the Crawford Dome are currently (2002) in a deteriorating condition due to the use of concrete mortar to patch repair the original lime mortar. The Dome is not currently used for astronomical purposes.

The Transit House has significant value in the history of astronomy on Calton Hill. Built by the Astronomical Society soon after their formation, the Transit House housed a transit telescope thought to have been used to provide Edinburgh with its first accurate time service. The north /south meridional slots (currently blocked) were part of a continuous timber slatted slot which ran through the centre of the roof (on the same principal as the meridional slots of the main Playfair observatory). The instruments in the transit House were moved to the City observatory once it was completed. The building is currently (2002) used as a storeroom.

The compound wall of the City Observatory was designed by Playfair in 1827, and partially replaced the original wall (late seventeenth century) contemporaneous with Old Observatory House (see separate listing). The existing rubble built sections (to north and east) were the sections that were retained. The east and south wall were demolished and replaced by Playfair on a new line, to make the enclosure more regular. He incorporated Old Observatory House into his enclosure wall to the west, and to the east the Playfair Monument (see separate listing), which was also designed by Playfair and erected in memory of his uncle the year previous. It is interesting to note that Jardine, Playfair's rival for the Observatory commission, also proposed to rebuild the enclosure wall with a very similar bow to the south wall, but also proposed that the north wall should be bowed.