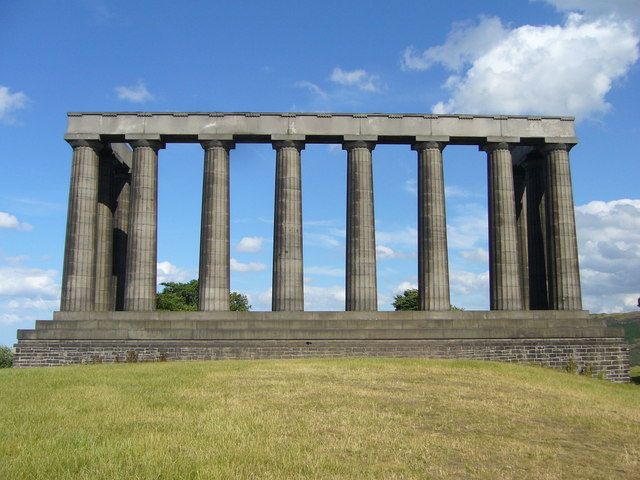 The National Monument is of great importance for several reasons. Individually, although by no means complete, it is a building of very high quality and workmanship, and represents work by two of the early nineteenth century's most eminent architects. It has historical and political significance as a Scottish monument to the Scottish troops that died in the Napoleonic Wars. It is of immense significance due to its architectural style, which causes it to be a cornerstone of Edinburgh's reputation as the 'Athens of the North'.

The idea of a National Monument to honour the dead of the Napoleonic Wars was first suggested by the Highland Society of Scotland in 1816. The decision to have a separate monument for Scotland was highly significant culturally and politically. Some argued that the function of commemoration would be more appropriately fulfilled by a single British monument in London. However, following Edinburgh's more overtly pro-Union stance in the later eighteenth century, it was felt by many that Edinburgh, and Scotland in general, although part of the Empire, should be able to express their individuality and national identity. The situation was likened to that of Athens under Roman rule, subsumed into a wider empire, but seen as stronger in terms of intellect and culture. Edinburgh was therefore beginning to be seen as Athens to London's Rome, a claim which was strengthened by Scots achievements during the Enlightenment, and the extensive adoption of the Greek Revival style of the architecture of Edinburgh in the early nineteenth century.

Initially designs for Triumphal Arches were put forward, with one from Gillespie Graham, and a proposal from Archibald Elliot to place one at the end of his Waterloo Place. However, a committee of subscribers was formed and first met in 1819, deciding to erect a monument incorporating a church. Elliot was asked to produce a design, and put forward a circular hall, based on the Pantheon, with a church nave attached. However, there was growing public support for a design based on the Parthenon, and so Elliot revised his design accordingly in 1821. C.R.Cockerell is thought to have become involved as early as 1820, on the strength of his being one of the few people who knew well, and had accurate drawings of, the original Parthenon. He appears to have advised on the siting of the monument in 1822; in January 1822 an appeal was launched for #42,000 to 'erect a facsimile of the Parthenon'. On 27th August 1822, during the visit of George IV (who did not attend), there was a foundation ceremony.

In 1823, Elliot died, and an Act of Parliament was passed, allowing the progression of the monument project (although no financial support was offered). Cockerell was subsequently appointed architect to the project, and Playfair was later appointed as site architect. The proposal was to set the Parthenon on a platform formed by a large pilastraded substructure containing catacombs, with square pylons at the east end (the springing line and first few courses of the intended vaults can be seen on the interior walls). The first contract for construction, signed in 1826, was for around #15, 000; all that had been raised of the projected #42,000 total cost. The quality of workmanship was excellent, as was typical of Playfair. The materials were also top quality (best Craigleith stone) and expensive, as was the cost of construction itself; it was reputed to have taken 'twelve horses and 70 men to move some of the larger stones up the hill'. By 1829, the funding for the project was exhausted, and with no more forthcoming, the scheme was abandoned, with only the columns and architrave of the west portico completed.

Ever since work stopped on the monument, there have been numerous proposals for the completion of the building, in various ways and for various reasons. In the earlier part of the nineteenth century these schemes tended to push for completion of the monument of the original plan. At the turn of the century there were several suggestions, including finishing it as a monument to Queen Victoria (1901), to commemorate the Act of Union (1907), or even as the National Gallery (1907) or Parliament building (1908). In 1918 George Washington Browne proposed extending the monument and adding sculpture to create a memorial to those that fell in the Great War. However, as yet, the monument remains just as it did when the scaffolding came down in 1829, famously known as 'the pride and poverty of Scotland'.