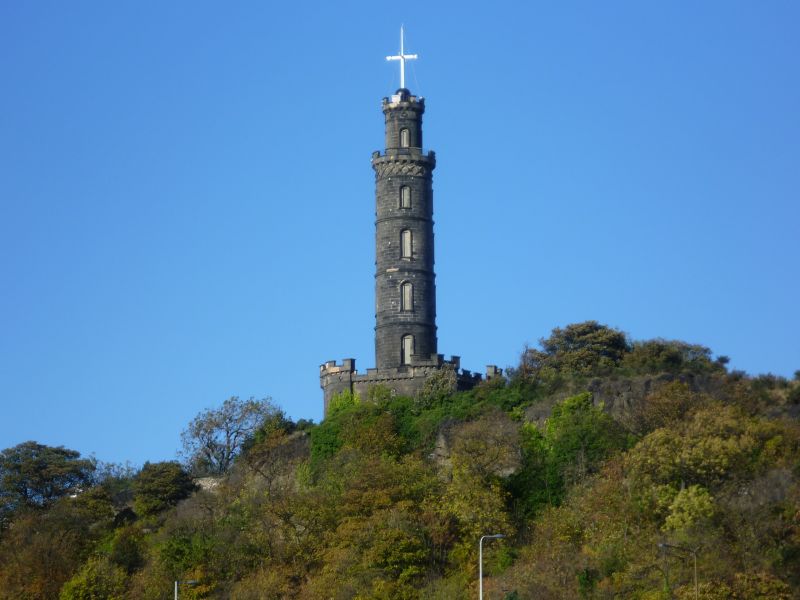 E (ENTRANCE) ELEVATION: to centre, 2-leaf timber panelled door with flanking margin lights; intersecting tracery in segmental fanlight; all in architraved round-headed openings. Above, panel commemorating Nelson, surmounted by a sculpture of the stern of the San Joseph. Timber-boarded door with glazing above to NE side of tower to 6th stage.

This unusual building plays very valuable part in the overall aesthetic composition of Calton Hill, and is one of Edinburgh's most prominent landmarks. It also forms a dramatic termination of the vista down Princes Street from the West End. It is of a highly individual design, although the style was similar to that of Robert Adam's Bridewell which once stood close by. It is also important for its association not only with the Battle of Trafalgar but for the part it has played in the history of timekeeping in the city.

The monument was funded by public subscription, managed by some of Edinburgh's most prominent citizens. They selected the highest point of Calton Hill, a site where a signals mast already stood, as the position of the new building. Alexander Nasmyth was asked to prepare a design, but it was deemed elegant but too expensive, and so Robert Burn's more economical scheme was the one finally approved by the committee. Work began in 1807 and progressed well, with the majority of the tower completed by 1808. However, a subsequent lack of funds all but halted the building works for several years, and the single storey pentagon of rooms surrounding the base remained unbuilt. Burn died in 1815 and Thomas Bonnar took over the supervision of the monument's construction, which was finally completed in 1816.

It was intended that signals would be flown from the monument, which would be controlled and maintained by a signal officer and 5 disabled seamen, who would be accommodated in the base of the monument and possibly a cottage nearby. There would be public access to the viewing point at the top of the monument for a small entry fee, which would be used to pay for maintenance costs. By 1820, the base of the tower was at least partly used as a tea-room, with a variety of refreshments served; it was also used to host Nelson Dinners. The turnstiles (Norton's improved patent Abyssinian turnstile) in the lobby were installed in 1886.

In 1852/3, the time ball mechanism was installed at the top of the tower by Professor Charles Piazzi Smyth, the Astronomer Royal. It gave a visual signal that enabled the captains of ships anchored in the Firth of Forth to set their chronometers accurately without coming ashore. The time ball's mechanism was connected by an underground wire to a mean time clock in the City Observatory (later connected to the Blackford Observatory when the Royal Observatory moved from Calton Hill). Just before 1pm, the ball would be raised, and then exactly on the hour a signal was sent electrically via the wire, causing the ball to drop. In 1861, the "one o'clock gun" was installed at Edinburgh Castle, to provide an audible time signal in case bad weather prevented the ball being visible. The gun's clock was connected to the clock on Calton Hill by a 4,020-ft overhead wire. The time ball is no longer triggered automatically, but manually, by an operator who watches for the puff of smoke from the gun at the Castle.

The tower continues to be open to the public, but the surrounding rooms, which were until recently used to house the caretaker of the tower, are no longer lived in.