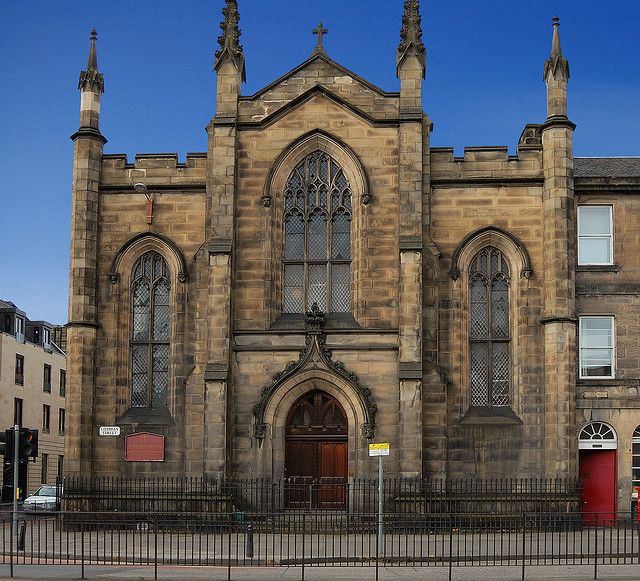 advanced bay to centre, flanked by angle buttresses with crocketed

pinnacles; Gothic 2-leaf timber panelled door with timber crenellation and gothic fanlight above in crocketed hood-mould; window above with

A good early 19th century former church with halls prominently corner sited, with a finely detailed Gothic entrance elevation and characterful heavy massed elevation to the SW side forming a large part of the street elevation.

Jericho House was originally built as St Patrick's Roman Catholic Chapel and School in 1834 to seat 700. It is marked as St Mary's RC School on the 1877 Edinburgh Town Plan. From 1926 to 1988 it was used as St Francis Roman Catholic Church.

The church was converted in 1937 to form halls to the lower floor with a church above at which point the stairs to the upper floors we rearranged. The original paired stairs to the main entrance (SE) were replaced by the current single turned stairwell incorporating figurative statues and a new T-plan stair to the E rear section of the building. The building stayed in this form until 1988 when it was converted to become Jericho House, a residential care home for men. At this point the church to the upper floor was subdivided into 16 individual rooms for residents. The church is linked internally at half landings to the stairwell of the adjacent tenement, 49-53 Lothian Street (see separate listing), which is used as offices.

The planned street triangle of Forrest Road, Bristo Place and Teviot Row was conceived as part of Thomas Hamilton's (1784-1858) vision for the new Southern Approach Road linking Princes Street to George Square and the Meadows (via the Mound, Bank Street and a the new George IV Bridge). The City Improvement Act brought in by Lord Provost Chambers in 1867 was to implement better housing standards and to replace the medieval slum areas in Edinburgh's Old Town.