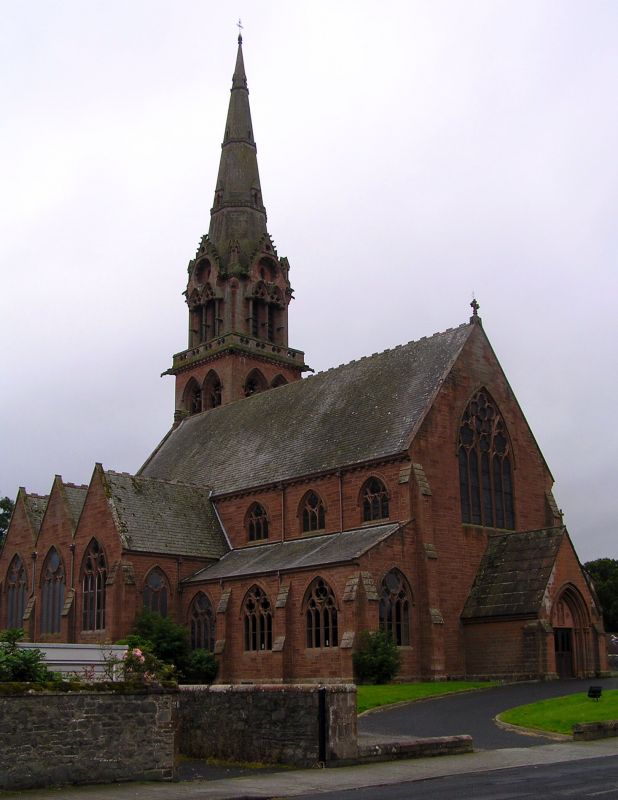 BOUNDARY WALLS: coursed whinstone with round copes to all sides. Former dismantled pyramidal gatepiers stored on site next to tower.

Ecclesiastical building in use as such. Old Parish and St Pauls Church is a good example of a later 19th century gothic church with fine stone detailing to both the exterior and interior with a prominent landmark spire. Designed by the Edinburgh firm of Hay and Henderson, the church is an integral part of the history of the parish church.

Built as St. Pauls Church from 1876-81 by Hay and Henderson at a cost of £13,000 with stone from the local Belses Quarry near Ancrum, for the expanding congregation that was fast outgrowing the nearby Parish Church of 1813. The instigation for the new church, to seat 950, came from local manufacturers who required a grander building in which to worship. The first 1st service was held 1881 and both churches held services concurrently until 1931 when the Old Parish church closed, at which point the church was designated as Old Parish and St Paul's.

The church underwent several additions in the years shortly after it was built; the imposing spire was added slightly later in 1886, also by Hay and Henderson, although much of the ornamentation was lost in a severe gale in 1899. The Memorial Window to Queen Victoria was added by George Henderson (1846-1905) in 1902 and the barrel vaulted porch by Peter McGregor Chalmers (1859-1922) was commissioned and funded by Charles Shulze of Brunswickhill as a memorial to his two sons killed in the 1ST World War. The carved figure of Christ is and exact replica of that in Amiens Cathedral, France, where they died. Bronze memorial wall plaques to all men lost from the congregation in both wars line the porch.

Several of the stained glass windows have been replaced by clear glazing, but a few remain notably, St Peter and Paul (1911) and Abraham and Moses (1906) by Douglas Strachan and The Good Samaritan of circa 1880 dominating the N wall. In 2003 a window by Eilidh Keith was donated by the Scottish College of Textiles to commemorate their long association with Galashiels.

The Church Halls of 1927 were built when Dr. Langlands was Minister. Langlands, a badmington enthusiast, stipulated the hall be built to the dimensions of a double badmington court, hence its lofty proportions.