A Category A Listed Building in Galashiels, Scottish Borders 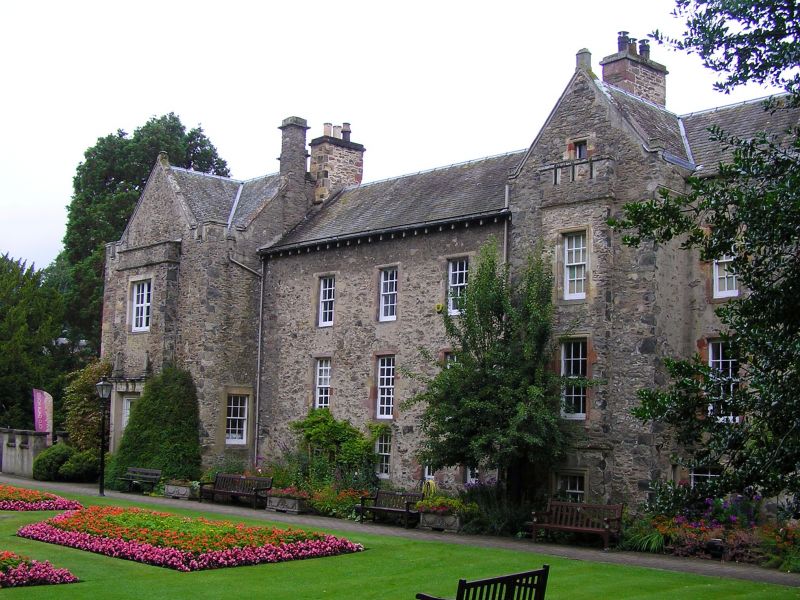 Old Gala House is a fine example of a laird's house with a long history of development having been extended and rebuilt at intervals from the 16th to 19th centuries. The house originally stood in its own policies to the W of the Old Town but has gradually been enveloped by the expanding town around it.

A tower on the site since 1457 is no longer evident and presumably subsumed by the secure peel tower house with a 1st floor entrance, built in 1583 by Andrew Hoppringill (Pringle) and the earliest evident part of the house as it stands today. In 1611 Pringle made Galashiels his main residence at which point he is said to have erected the SE wing alongside, but not connected. In 1635 Pringle relocated to Smailholm leaving his daughter Jean to marry Hugh Scott; the Scotts then becoming the Lairds of Gala. The painted timber ceiling, rediscovered in 1952, commemorates this marriage and the subsequent 1635 remodelling of the house. Old Gala House underwent further extensions circa 1830 and 1860, the latter phase being carried out by local builders Robert Hall and Co.

Old Gala House was superseded when the Laird Hugh Scott commissioned the Architect David Bryce to build New Gala House and policies to the W in 1872 (demolished 1985), which it ultimately outlived. The house passed into ownership of Scottish Borders Council and in 1988 Page and Park Architects converted the interior to form a museum celebrating the History of Galashiels, housing the original shaft of the Mercat Cross and elements from the now demolished Old Tollbooth. There is a permanent exhibition to the local sculptor Thomas Clapperton and individual office spaces available to independent groups such as The Old Gala Club. The 1583 section is now converted to form manager's accommodation and the building remains in use as a public facility (2006).

The houses of Woodnook and Bellendean on Gala Terrace, though now substantially altered and in different ownership, are the original kennels linked to Old Gala House, the adjacent Galashiels Bowling Club green was the decorative rose garden in the mid 19th century, and a very large walled garden existed until the earlier 20th century on the site now filled by St Margaret's RC Primary School on Livingston Place. Old Gala House is named 'Beechwood' on the 1897 Ordnance Survey map.