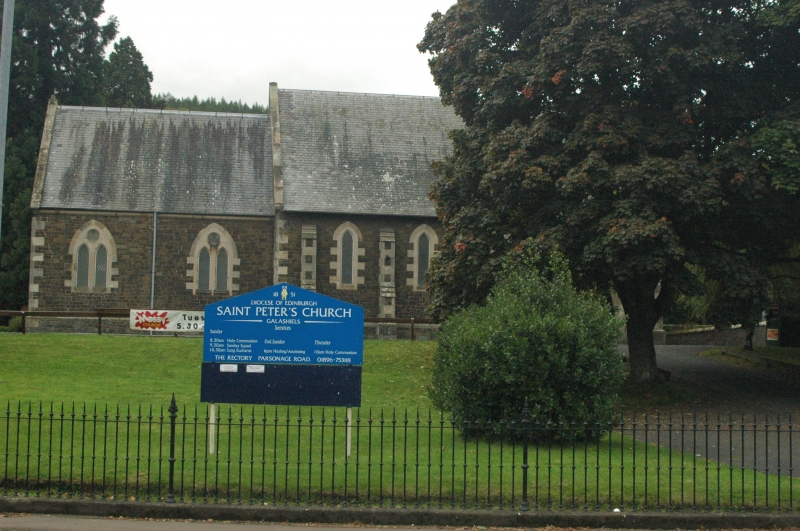 Ecclesiastical building in use as such (2005). B-group with the former St Peter's School and former hall. St Peter's church is a notable example of a simple mid-19th century Episcopal church, with good interior details, such as the altar by Robert Lorimer. The simplicity of the church reflects contemporary practice in Episcopal church building. Situated on a rise, the church makes a significant statement on a main road into Galashiels and forms an important group with the church halls and the Episcopal school.

The design and layout of this church in an Early English style relates to a series of Episcopal Gothic Revival Churches carried out in the south of Scotland in the mid 19th century. The style reflects the ideals of the Ecclesiological movement in English Episcopal churches. Similar churches are at St John's Jedburgh and Holy Trinity, Melrose. John Henderson, who designed the original church and George Henderson, who carried out the extensions, were both prolific designers of churches, particularly for the Episcopalian church. At the time St Peter's was built John Henderson was the foremost designer of these Tractarian Churches in Scotland.

The church also reflects the continued diversification of the population of Galashiels through the 19th century. This congregation originated in a mission in the lower flat of a house in Wilderhaugh in 1851. In June 1853 the foundation stone was laid for the new church, which was consecrated in August 1854. This original church had a short chancel with a vestry on the south side. In 1881 the chancel was extended considerably. A new south aisle with a separate pitched roof and an east-facing window was added, as well as a larger lean-to vestry.

In 1881 the Episcopal school was added to the north by Hay and Henderson, who also added the free-standing halls to the west in 1889. More recently, the south aisle has been divided off to form a hall to replace the large hall, now in separate ownership (2005).