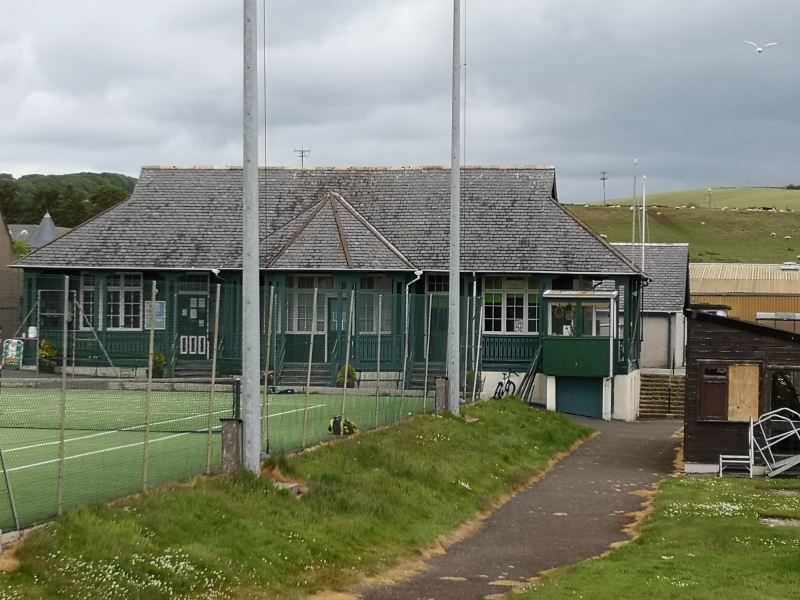 This distinctive pavilion prominently sited in Stonehaven's Recreation Grounds and close to the open air swimming pool (see separate listing), was an important addition to the attraction of Stonehaven as a seaside resort town. The interior of the pavilion is well-detailed for a building of its scale and type, retaining its panelled timber room with fluted pilasters.

Stonehaven developed as a popular holiday destination following the opening of the railway on the 30th October, 1849, by the Aberdeen Railway Company, with passenger trains starting on 1st November, 1849. In 1897 it was described as "of northern health resorts it is perhaps the most readily reached from all parts of England and the south of Scotland" (Eeks, p11). The Recreation Grounds opened in 1885, providing tennis, bowling and putting, as well as the seafront boardwalk. The pavilion was constructed to provide changing room and meeting accommodation for the users of the recreation ground, and today is used by the bowling and tennis club.

Lawn bowls today is a hugely popular sport in Scotland. It has a long and distinguished history with the earliest reference to the game in Scotland appearing in 1469, when James IV played a variation of the game referred to as 'lang bowlis' at St Andrews in Fife. The first public bowling green in Scotland was laid out in 1669 at Haddington, near Edinburgh, however it was not until 1864 that the rules of the modern game were committed to writing by William Mitchell of Glasgow in his Manual of Bowl-Playing. Machine manufactured standard bowls were invented by Thomas Taylor Ltd, also of Glasgow, in 1871 and the Scottish Bowling Association was formed in 1892. Today there are around 900 clubs in Scotland with an estimated 90,000 active lawn bowls players.

Modern lawn tennis was established in 1874 by Major Walter Wingfield who developed a new style of the game and a new type of court in order to speed up play. The Wingfield version came to Scotland when James Pattern tested the new game outside at the Grange Cricket Ground in Edinburgh around 1874 and it soon became the version which was preferred by players.