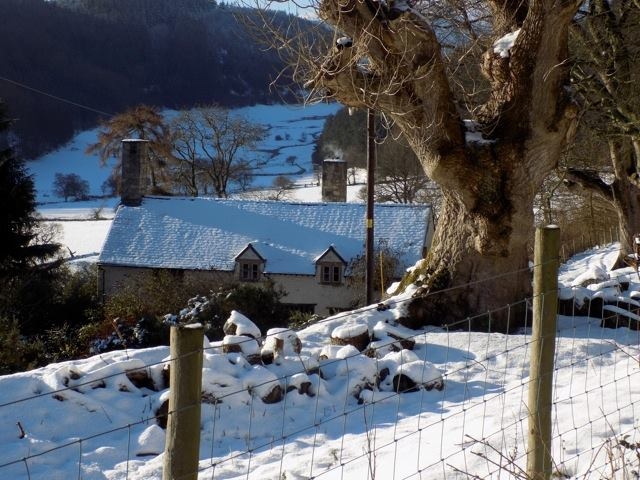 Location: Situated 2.5 km SW of Cilcain, reached from a minor road running W off the by road to Cilcain from Loggerheads.

Minor gentry hall house with a complex history. Its situation high on the slopes of Ffrith Mountain is unusual for a house of this status (an old Welsh meaning of Brithdir is 'halfway up'). Date inscriptions of 1589, 1642 and 163? suggest dates for building or remodelling this house, however the presence of an open central hearth in the hall suggests an earlier date and the absence of smoke blackening on the timbers raise the possibility it relates to an earlier phase of building. 1589 is remarkably late for the construction of an open hall house but a mid - late C17 date for flooring it over is borne out by the character of the mouldings on the ceiling beams. The construction of a lateral stack appears to be contemporary with the heated parlour and similarities between the fireplaces in the parlour and hall in contrast with that in the chamber over the hall suggest that flooring over took place after the construction of the stack. A wing attached to the rear of the hall contains fragments of timber framing which may relate to an earlier building on the site; it has a timber mullion window with chamfered rather than diamond set mullions, and was wholly or partially rebuilt in stone probably C18 or C19. Edward Lhwyd, in his list of notable houses in the parish, describes Brithdir Mawr as an ancient house owned by `Mr Wynne a minor' in 1707. Some refenestration with 2-light stone mullioned windows C17, a few windows of C19 and C20 date, minor C20 alterations, rear cross passage door was blocked and a window inserted.

3-unit plan with rear wing. Cross passage with timber-framed wall to left and entrance with step down to parlour which is heated by a large stone fireplace with replaced bressumer. Heraldic plasterwork, now elsewhere in the house, was moved from above the original bressumer, this has the arms of Ednyfed Fychan, the date 1642 and the initials 'GL' and 'ML'. Opposed door in cross passage leads to hall. This is heated by a large stone fireplace with corbels supporting the bressumer. Side walls are of post-and-panel con- struction, exhibiting burn marks from tapers, with timber framing above. Entrance to service area has date '1589' inscribed over. Inserted ceiling with ovolo-moulded beams supported by decorated timber corbels. At the cross-passage end the line of the stair is indicated by a truncation and stops on the beams. Beneath the C20 floor is a centrally-placed hearth of shale stones set on edge and rammed into the earth. It is eroded in the centre and there is an outer lip. To the right of the fireplace is an altered opening leading to the rear wing which has roughly chamfered primary and secondary beams and a tall stone fireplace with bressumer.

Stairs up from hall with crude newel post to upper parlour which has stone fireplace with corbels supporting a cambered bressumer, blocked door visible in timber-framing for access to the hall before it was floored over. Main chamber has sandstone Tudor-arched fireplace. Side walls with exposed collar and tie-beam trusses with lower king and queen struts, off-centre arch braced truss with pierced pendant and shaped struts. To right of fireplace opening leads to room in wing which has a collar and tie-beam truss with upper angle struts and six lower struts. It is largely of reused timbers. To the right it is morticed to the wall plate and to a substantial timber post which is visible from the lower floor, suggesting a timber-framed phase for the wing. Doors include plank doors with shaped strap hinges in openings with false 4-centre arches.

Listed as an important submedieval minor gentry house which illustrates the development from open to storeyed hall and retains many features which rarely survive, including a central hearth and timber transomed windows.