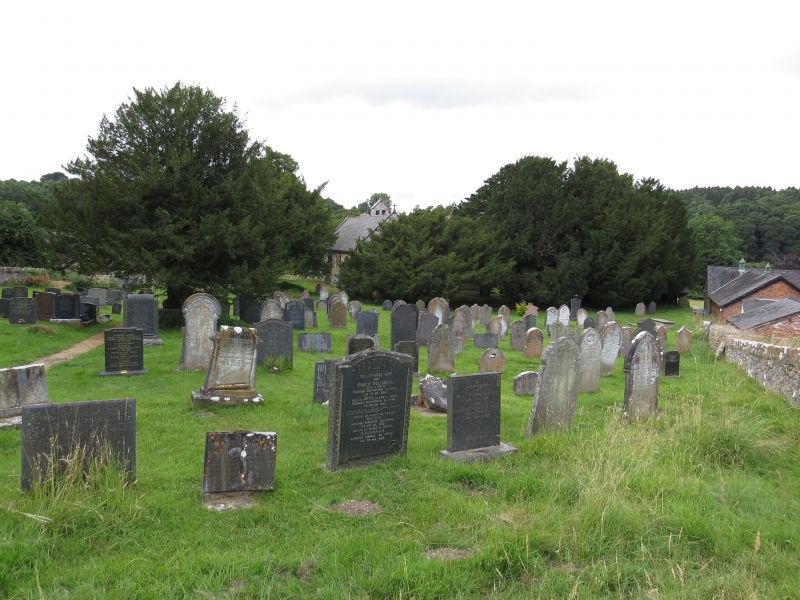 Location: 1 km south of Nantclwyd Hall, in a stone-walled churchyard with iron gate and steps to south; also entered at north by a late-C19 timber-framed lychgate. War memorial cross at west.

A round churchyard form shown on early maps suggests early origins. The 'ecclesia de Lanelidem' is mentioned in 1254, but the present fabric appears to be all C14 or later, with C15 east windows. The rood screen was broken up at the Reformation, but fragments remained and have been incorporated into later carpentry, together with fragments from other sources. Glass and stonecarvings were lost to the Puritans. Some Georgian box-pews remain.

St Elidan's was one of the last unrestored churches in the Vale of Clwyd. The church was partly repaired in 1830 at a cost of about £130. In 1849-50 it was re-pewed and re-paved. The screen and roodloft were dismantled and are said to have been mostly removed to Ruthin in 1859 and since lost. In 1889 it was reported that the roof was in a state of collapse. Under the Rev. Thomas Pritchard the church underwent a major restoration costing over £1000, completed in 1890, to the design of John Douglas (Douglas and Fordham of Chester) with Mr Morris of Derwen as Contractor. (A previous scheme by Arthur Baker of Kensington was not carried out, due to lack of support by the Squire.) A large vestry or parish room was formed in the west extension of the nave, in place of a previous smaller one, the old gallery stairs being removed. The pulpit was moved to its present position, the reredos assembled from Jacobean panelling and the lobby at the north porch door was constructed. The lychgate was added at this time. Losses in this period included floor monuments and painted wall texts. Bones of three human skeletons were found immured in the north wall.

In 1933 the church was still described as largely unspoilt, but the majority of the box pews were removed in 1937 during alterations with G R Griffiths of Denbigh as architect. The clerk's desk was removed and its front carpentry mixed up with the old pulpit.

Richard Parry, Bishop of St Asaph and reviser of the Welsh Bible (1620), was formerly a Rector of Llanelidan.

A double naved church (the south nave being shorter), characteristic of the region, in local irregularly coursed masonry, mainly limestone. Much of the masonry, especially at the east and north west, is a C19 rebuild. Slate roofs with ridges of red tile; stone coped gables with terminal cross finials except at the west of the north nave, where there is a two-opening bellcote. A deep timber wallplate is exposed externally on the south side.

The windows are in yellow freestone. Both east windows are C15 Perpendicular, that to the north-nave chancel is in five main cinquefoiled lights with ten trefoiled upper lights, that to the south nave is in four main trefoil or quatrefoil headed lights with quatrefoiled upper lights. Both windows have slight label moulds. At the south side the first and third windows are also of Perpendicular form, the middle window is flat-headed with trefoiled lights and is inscribed RT 1626. The west window of the south nave, the adjacent door and window of the vestry and two north windows west of the porch are all C19 insertions. East of the porch on the north side is a three-light window inscribed RP 1618, and a two-light chancel window of the C14 with a bold label mould including one surviving terminal head. The main north door is also C14, with a bold label moulding and two terminal heads similar to that of the last-mentioned window. Shutter pins and hooks survive on some of the northern windows, and all retain their glazing stanchions and saddle bars. The porch is C14, the outer frame in massive carpentry, the inner frame much lighter.

The interior is equally divided by a stone arcade of five pointed arches, the nave and chancel to the north more elaborately detailed. The north nave also extends further west and contains a vestry, and the church may be entered either through this or through the C14 porch at the north side.

The north nave retains its C14 roof in five and a half bays with arch-braced collar-beam trusses and a single purlin each side, the purlins supported on large plain curved windbraces (the latter probably inserted during restoration). The south nave is also roofed with collar beam trusses in five bays. It has two purlins each side both with cusped windbraces. The north nave has plain V struts, but south nave cusped V struts, above the collars. The chancel and the corresponding part of the south nave are both differentiated by timber waggon ceilings.

The reredos is in Jacobean panelling reconstructed in the C19 restoration, with floral panels above, arch-headed panels below; plain boarding below that. To the right of the reredos is an ogee-headed aumbry. The late C17 communion rails have broad turned balusters and square newels with knob finials, and double gates. At the north side is a fine large pulpit with vigorous carvings; below it a clerk's desk formerly stood, but the joinery is now all gathered into the pulpit. It faces south. Its upper stage has panels resembling the upper stage of the reredos. The front has canted sides to the upper stage, and below that a frieze with mythical beasts, then foliage panels between broad reeded muntins and a lower frieze with a vine trail.

At the north entrance is a C19 oak-screened lobby with double doors giving access direct to the interior and a side door to the west. The nave is two steps down from this entrance, but the north west of the nave is an intermediate level defining a baptistery. The font is late mediaeval, hexagonal, but probably scraped during the restoration work. Most of the interior has modern pews (1938), but C18 box pews remain adjacent to the south wall. There is a panelled dado around the whole interior.

The full height timber screen between the nave and the vestry has double doors and two high-level windows. The beam at door head height carries a carving on the west side with an angel and two confronting animals, one a griffin with a knotted tail terminating in a second head. The east face of this beam is carved in repeated quatrefoils. Above the windows of this screen is a second beam probably taken from the rood, with a zigzag line of blind tracery and moulded top edge.

The south nave contains a fine set of monuments. Left of the east window is a large Baroque memorial in figured white marble to Humphrey Jones of Ddôl [1676] and Jane [171½]; broken scroll pediment with low relief central urn; urns on flanks of pediment; detached columns against ramped volutes; inscription within parted curtains with cherubs; second inscription to Mrs Jones below the shelf, with more cherubs. To the right of the window is a Classical monument to Richard Kenrick of Nantclwyd [1802] and Elizabeth, and other family names and coat of arms below. Another large Baroque monument on the south wall to Eubule Thelwall [1694] and others; a monument to Lieut. George Vivyan Naylor-Leyland [1914] by Gaffin, with Ionic pilasters, a heavy broken pediment with military banner; with the inscription are a Guards officer's helmet and sword. Plain plaque to Sir Vivyan Edward Naylor-Leyland [1987]. Simplified Classical monument to Lloyd family of Nant Clwyd Isa. To the west of this group is a C19 panel with the Lord's Prayer, the Commandments and the Apostles' Creed in Welsh. The only memorial on the north side is a picture representing the Blessed Edward Jones, martyred in 1590, 'a man of this parish'. There are small C18 floor brasses.

Small fragments of mediaeval stained glass survive and have been incorporated in the corners and upper lights of the east window and elsewhere; the glazing is generally Cathedral tinted glass installed in the 1890 restoration.

Listed at II* as a fine example of a Vale of Clwyd double-naved church modestly restored in the C19, with particularly good pre- and post-Reformation woodcarving.