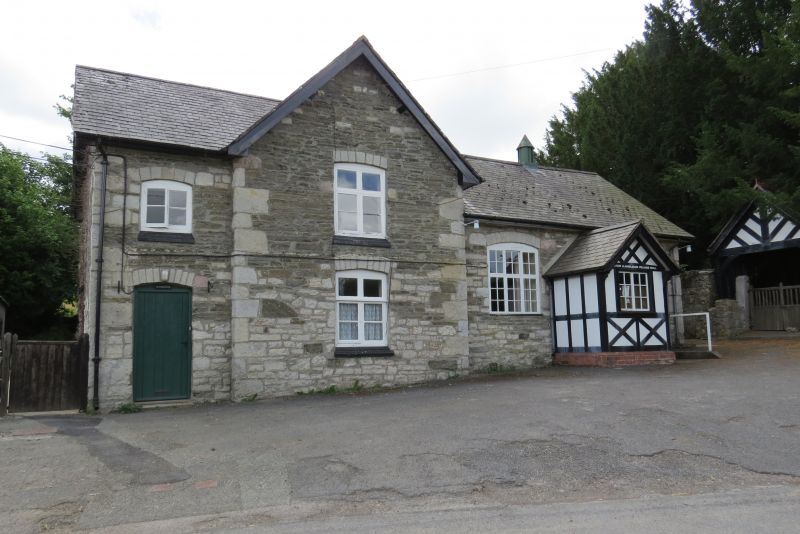 The Rev. Mr Roberts, Curate of Llanelidan (later Rector), established the village school in 1846 on Nantclwyd Estate land given by Christopher Leyland. It was improved, and probably virtually rebuilt, in the period 1886-8, including the addition of the school porch. The master's house is to the north, still named Ty'r ysgol; the schoolroom is to the south, and is now the village hall, much enlarged at rear.

The former master's house, at left, is of two storeys and two windows, in irregular slatey masonry with limestone blocks lower in the walls and in the window and door arches; slate roof with a tile ridge; timber bargeboards; renewed timber windows. At left a door with small casement window above. The right part of the house is gabled and slightly advanced, and has mullion and transom timber windows. Red brick lateral chimney at right at the point where the schoolroom joins.

The schoolroom, at right, is in limestone masonry to the front and slate masonry to the side gable. The roof is of slate with a tile ridge. This part is symmetrical fronted with two large mullion and transom windows with small panes, separated by a later porch in mock half-timbering, the latter standing on a red brickwork plinth. Eaves to the front, roof ventilator near centrally on the ridge. There is a large rear extension to the latter in brickwork.

A good mid-C19 church school and house, rebuilt in the late C19, in close association with the church; listed also for group value with St Elidan's Church.