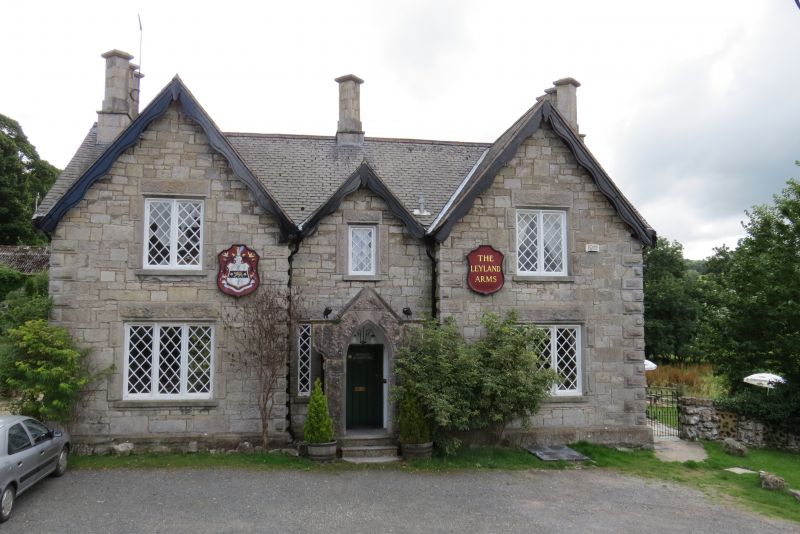 Based on Ty'n-llan farmyard, the public house was built in 1844 as part of the Nantclwyd estate of Richard Christopher Leyland. The quarry-glazing of the main windows may be later, in the style of the building work of Tom Naylor-Leyland. Minor alterations were made to the rear by Sir Clough Williams-Ellis c1966, contemporary with his work on Nantclwyd Hall. The public house at the front of the site was not originally attached to the buildings at the rear.

A public house of two storeys and three windows front elevation, in Tudor-Gothic style. Local rubble including the plinth, emphasised rock-faced quoins and wave-moulded bargeboards; slate roof, boarded eaves and diagonally-set stone chimney stacks grouped in threes at the ends plus one single stack to the centre.

The symmetrical three-gabled front is distinctive for its diamond-paned iron-framed casement glazing, the surrounds of which repeat the rock-faced detail of the quoins; the outer bays are slightly advanced and have two-light windows to the first floor within large gables and three-light windows below. Single-light under a smaller gable to the central bay over the porch. The front carries two panels, to left the Leyland coat of arms and to right the name of the public house. The porch is a striking feature, with huge kneelers encrusted in river pebbles; the keystone is inscribed 'R Leyland Esq. AD 1844'. There are flanking tall thin lights. Pointed and chamfered arched entrance with boarded door.

Listed for its distinctive and well-preserved mid-C19 estate-built character and for group value with St Elidan's Parish Church.