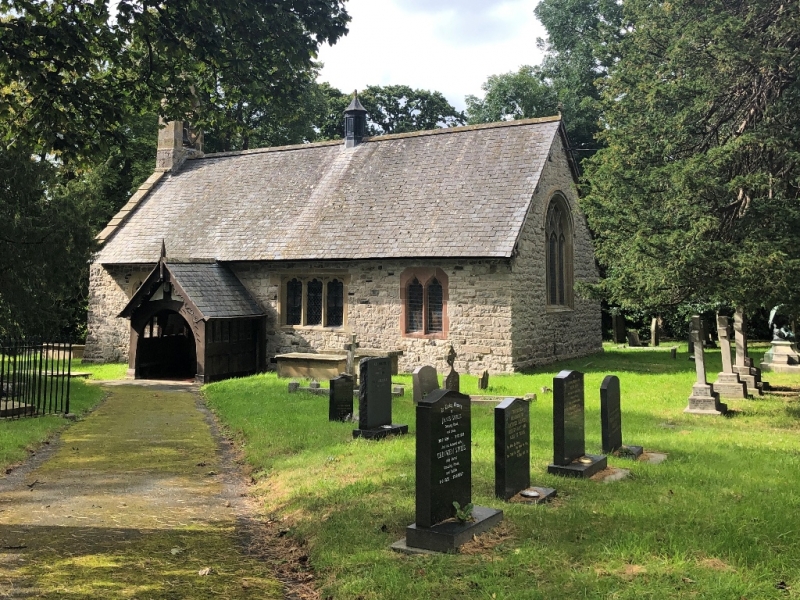 Location: At the west side of the B5429, north of the turning to Pont Llanychan. The churchyard is rounded at the north but is otherwise square.

The church of St Hychan is first mentioned in 1254. The dedication is to St Hychan, thought to have been related to Brychan Brycheiniog. The present structure is perhaps of the C15, and follows the Vale of Clwyd type in having no exterior differentiation between nave and chancel. It was visited by Glynne in 1864 and drawn by Lloyd-Williams and Underwood in 1872: Glynne noted recent restoration and altered windows to north and east.

The church was extensively restored in 1877-8 by Arthur Baker, architect, of Kensington, at a cost of £700 paid for by John Taber of Clwyd Hall. The vestry was added; the roof restored; the north windows were made uniform with that at south-east, and the porch was rebuilt. The poorly reconstructed west doorway arch probably predates this work. A Gothic style south window, dated 1626, was retained. Conventional Decorated tracery appears to have been restored to the east window, together with its stained glass, as a gift of Sir Crosland Graham of Clwyd Hall in 1925.

The church is in axe-dressed limestone in small courses, without selected larger quoins, with dressings of red or yellow freestone. The roof is of slate with a coped gable at the west only, surmounted by an ashlar bellcote with bell and wheel, coped and with a small cross finial. There is an octagonal roof vent at centre. The vestry at the north-west is in similar materials with a pyramid roof. The porch at the south is timber-framed and has decorative bargeboards.

The east window is of the size and shape shown in the pre-restoration drawing of 1872, but the tracery in Decorated style is thought to be an early C20 gift. The east window on the south side is the only one in red sandstone, and this and the 2 on the north side have pointed trefoil-headed lights. The adjacent 3-light window is marked RT / 1626, of 3 trefoil-headed lights. The south door is within a 2-centred arch with a chamfer and broach stops. The west door has a round arch made of reused jamb masonry. Above is a two-light square headed window.

The nave is single with a fine C15 timber-framed roof in seven bays, with braced collar beams and 2 purlins each side with cusped windbracing. V struts above the collars; ashlars to both common and principal rafters. Red and black quarry tile floor, plain pews in 2 banks.

The chancel is raised by one step, paved in black and white quarry tiles with inserts of encaustic tiles. The pulpit is C19, octagonal; the prayer desk at right is carved in low relief and dated RI / 1730. the Communion rails have simple turned balusters and a brass bar. Tall pews each side of the altar with panelled fronts incorporating balusters. Timber which may have come from a waggon ceiling over the sanctuary is incorporated in the reredos of 1846.

The east window is by J Dudley Forsyth, given by Crosland, and marked AMDG on jamb. The first window at right is dated 1899; first at left dated 1869; second at left by Kempe, dated 1891.

There are 3 C18 armorial wall monuments to members of the Jones family including that at centre, commemorating Dr Richard Jones, Chancellor of Bangor from 1675, nonjuror; fluted pilasters and cherub heads.

A well preserved church of the single nave Vale of Clwyd type with a fine roof and good C19 restoration.