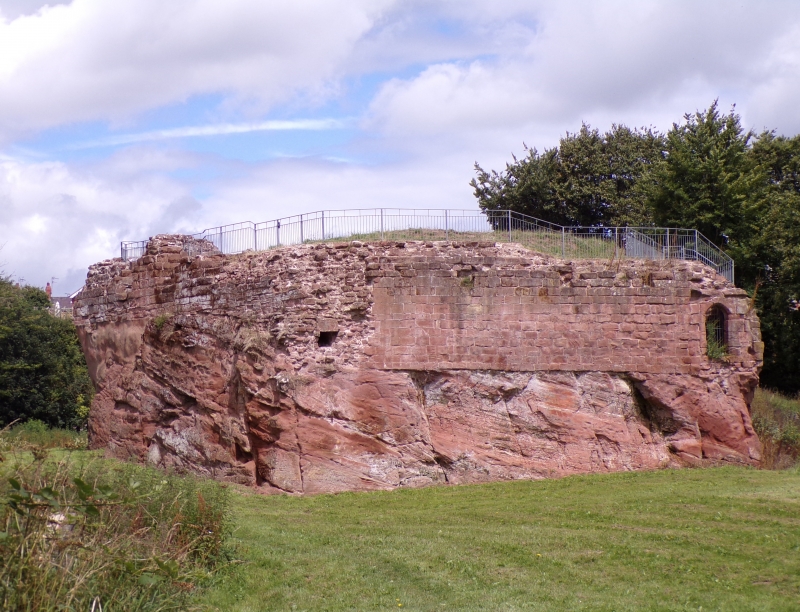 Location: Situated at the end of a path to the S side of Deeside. The castle remains are situated on a sandstone boss around which a quarry was later dug out.

The remains of the present structure date back to the second Edwardian campaign of 1282-3, however it is probable that the site had been of strategic importance for many centuries before. Bronze Age remains have been found on the site. The Edwardian lordship castle was built by the Earl of Surrey, John de Warenne. When John Noren visited the site in 1620 he described it as 'nowe in great decay'. It is however clear from his drawings that it was a single ward castle, planned as a regular pentagon, with buildings ranged against each curtain wall and a tower at each angle. Four towers were round, with watch turrets and battered plinths while at opposing ends there were square towers, one of which was a gatehouse barbican. The castle changed hands at least twice during the Civil War. The castle was demolished between 1675 and 1683 to provide building material for Sir Thomas Grosvenor's Eaton Hall.

The remains stand upon an artificially-shaped boss of red sandstone upon and around which the castle was originally constructed. Sandstone blockwork survives, the S side being the best preserved with a doorway and steps leading into the interior.

Grade II* for the special interest of its origins as a medieval castle.