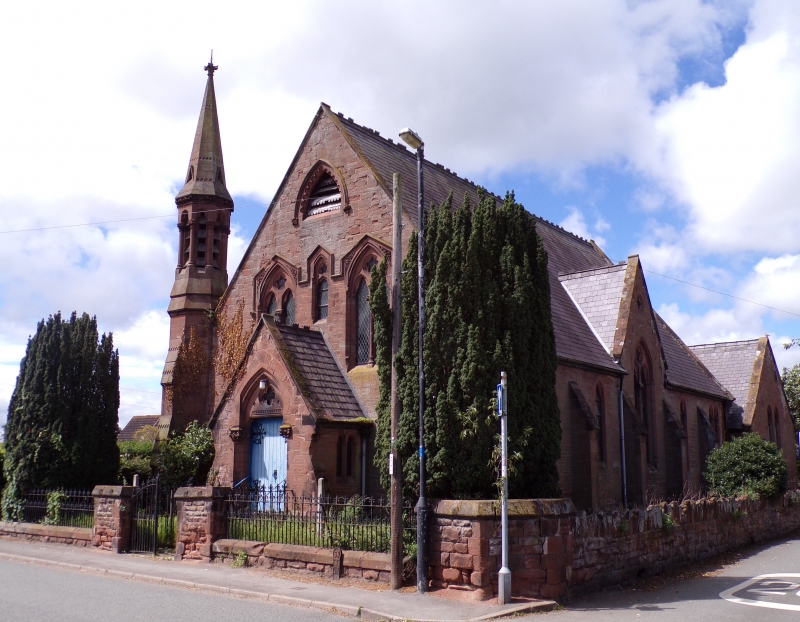 Location: Situated on the W side of Castle Street. The church is set within its own enclosure surrounded by a low sandstone wall surmounted by cast-iron railings.

Designed by T.M. Lockwood, architect of Chester, and built in 1865. The building was instigated by the Rev. Ebenezer Powell who opened the Academy School.

There is a fairly complete contemporary scheme. Arch-braced roof timbers rise from painted stone corbels; there is a decorative timber frieze. 4 and 5 pointed star shapes are motifs which are carried through from the glass in the tracery to pierced designs in the roof joinery and incised shapes on the pew ends. Where the windows are paired they are separated by stone shafts with foliated capitals. At the liturgical W end there is a pitch pine lobby with blind cusped arcading. At the liturgical E end is a central pulpit of similar character with steps up on each side with arcaded balustrading. A door on each side leads off to a schoolroom. Windows have coloured and painted glass in the tracery but are otherwise plain with coloured glass margins. Pews are of pitch pine with painted numbers. On the liturgical E wall are 3 later C19 monuments in Neoclassical style commemorating former ministers and elders of the church; two of them are by Mossford of Overton. The schoolroom has exposed timbers in the roof.

Listed as a good example of Presbyterian church architecture by a noted architect containing a good contemporary interior scheme.