A Grade I Listed Building in Trevor, Wrexham 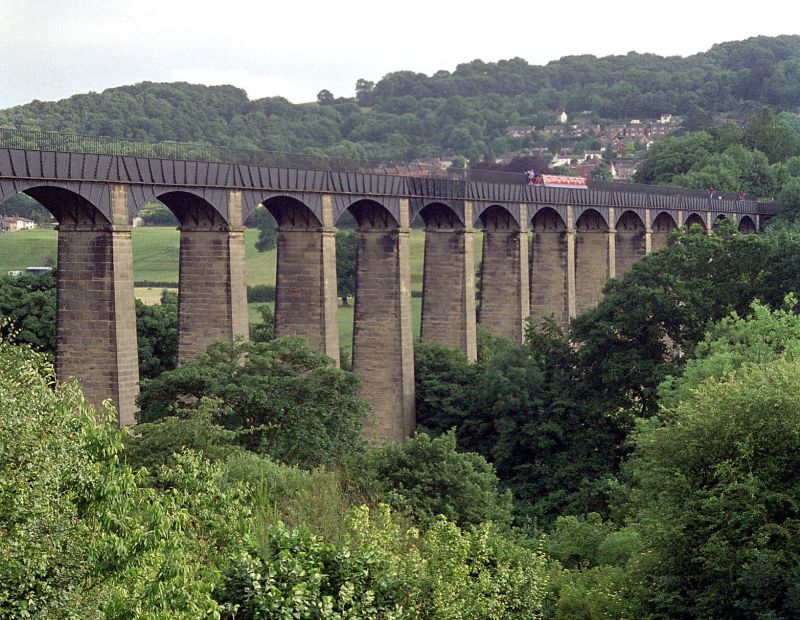 Location: Located over the River Dee between Trevor and Froncysyllte.

Pontcysyllte Aqueduct was built between 1795 and 1805 to carry the Ellesmere Canal across the valley of the River Dee. It is widely regarded as the most spectacular achievement of waterway engineering in Britain and a pioneer of cast iron construction.

The initial Ellesmere Canal scheme, promoted by Act of Parliament in 1793, was one of the most ambitious ever devised. It planned to link the Mersey (at what was to become Ellesmere Port) with the Dee at Chester, then Wrexham and the North Wales coalfield, the Shropshire town of Ellesmere, and eventually with the Severn at Shrewsbury. The Pontcysyllte Aqueduct was a vital feature in this scheme in crossing the valley of the Dee. However, in the final scheme, Wrexham and Shrewsbury were not reached, and the industrial district around Trevor instead became the terminus of a southerly route from Chester via Nantwich and Whitchurch. The construction of the aqueduct was already well under way when this change of plan occurred; otherwise Trevor would probably have been reached instead by cheaper tramroads. The original purpose of the aqueduct on a through route was replaced simply by its giving access to the terminus and to a branch and water feeder from Llangollen.

The principal engineer for the canal was William Jessop (1745-1814), one of the most important canal and dock engineers of the day. The General Agent was Thomas Telford (1757-1834), then a little known county surveyor, but to become the most prolific civil engineer of the early nineteenth century. Jessop's initial plan was to cross the valley on a massive embankment and a masonry aqueduct of exceptional height. Owing to the difficulties of building such a structure, it was proposed for a time to build a lower aqueduct with locks down on either side. The decision in 1795 to continue at the original height made it desirable that weight should by minimised, and the aqueduct was designed with hollow masonry piers and spans of cast iron. Wide attention was paid to the potential of cast iron for use in bridges and aqueducts during 1795, though it was still novel as a structural material. By the time that Pontcysyllte was completed in 1805, it was the third iron canal aqueduct to be built in the world. Owing to its particular daring and elegance, however, it was by far the most influential. It was the subject of much popular praise and set the model for many aqueducts and iron bridges which followed.

The relative roles of Jessop and Telford in the design of the aqueduct are disputed, though in the past credit has been given largely to Telford, who almost completely excised mention of Jessop from his autobiography and other papers. Current interpretations suggest that both men played important roles, but that Jessop, as principal engineer, was ultimately responsible. The idea of building the aqueduct at such a height was Jessop's, and the idea of building it in cast iron may have come from either Jessop or Telford, since both were closely acquainted with new thinking on the subject in civil engineering and the iron industry. The design of the trough was probably by Telford in conjunction with William Hazledine, the noted ironmaster who supplied and erected it. The masonry piers were designed by Jessop and executed by John Simpson and John Wilson. Matthew Davidson was superintendent of the construction and may also have had an important role in the detailed design.

An aqueduct of 19 spans, which crosses the River Dee at a height of 38m. It is 307m in length. The spans are of cast iron plates which are bolted at their flanges. The trough containing the water is constructed of segmental plates with radiating flanges to the outside. The upright flanges are swept to their greatest thickness where they meet the base flanges, which are emphasized to create the architectural impression of a string course. Four cast iron arches support each span of the trough from below, the outer two being cast as ribbed plates which continue the lines of the trough ribs to suggest classical arch voussoirs, with a 'keystone' to the centre. On the east side, a towing path is supported over the waterway by curving cast iron posts and beams and wrought iron ties, leaving space for the movement of water underneath as boats pass. A cast iron handrail with vertical railings is fixed to the outside ot the towpath. There is no handrail on the western side of the trough.

The 18 piers are constructed of finely dressed stone, hollow in their upper parts. They taper towards the top in both dimensions, and end at trough level. There are small cornices from which the arches spring. The four piers in the River Dee have pronounced cutwaters. There are massive curving abutments at both ends, with handrails continued onto them. A cast iron plaque on the river bank pier on the Froncysyllte side of the Dee records the purposes of the canal enterprise and the laying of the first stone on 25 July 1795.

Listed at grade I for its important contribution to the development of canal engineering and the structural use of cast iron, and as an internationally renowned monument of the Industrial Revolution.