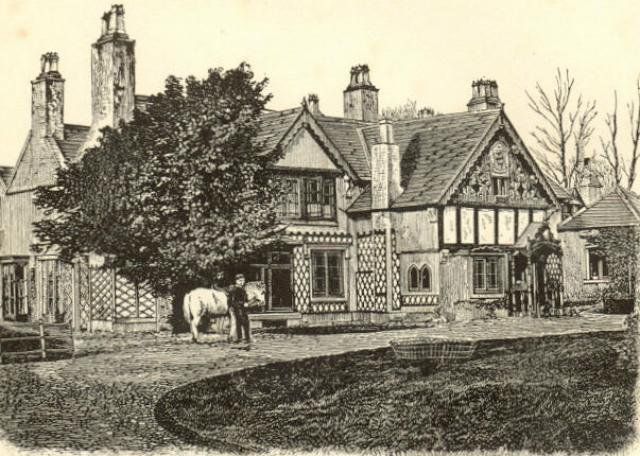 Location: On the corner of the B5097 Ruabon road and Plas Bennion Road, at the SE end of the village.

The house is said to have been built in 1647 for a Captain William Wynn: it came by marriage into the Kenrick family (prominent local non-conformists) in 1722, and remained in this family (later called the Wynn-Kenricks) until 1970. The original construction (where visible) is compatible with an early C17 date, but the building has also been extensively remodelled: much of the exterior detail appears to be early C19 and it is likely that the raising of the building and the introduction of additional decorative material inside the building is of this period. The building was also extended to the rear in the later C19.

Roughcast render over timber frame (but with some walls said to be brick and stone), with some decorative framing exposed in the porch and the dormer gables. Slate roof, and C19 brick stacks (axial and end-wall) with terracotta caps. Two storeyed, 3-unit plan, with off-centre axial stack and baffle entrance, housed in a wide projecting gabled wing, housing entrance passage and small room alongside it. This wing has whimsical timber gabled porch with decorative panel-work and turned supports, carrying a date of 1649, but almost certainly early C19. The diagonal small-panelled framing with quatrefoil decoration in the apex of the gable, however, is probably early C17. Similar decoration in the apexes of the dormer gables over the paired upper windows to the left of the porch, and the single window to its right. Windows throughout (with the exception of the later rear range) are small-paned 2-light casements with margin lights in heavy wood frames; the lower windows have drop-ended hood moulds. In the porch wing, a small 2-light window with arched glazing bars, and timber 'lancet' lights in its left-hand return.

Central hall has axial fireplace with plain timber bressumer (it was previously enriched with introduced decorative timber panelling but this was removed c1970). Dado panelling, assembled from fragments of C17 date, including some decorative frieze-work. Similar decorative panelling enriches the staircase which appears to be of early C17 date and has turned balusters and newels with acorn finials, but which is almost certainly inserted in its present position (it is very steep, and its head is against a timber-framed partition wall - the tie-beam has been cut to provide access from the staircase to the first floor). Study in advanced gable has a fireplace with an ornamental surround assembled from decorative panelling in a C17 style: together with the hall panelling and staircase, it represents the only remaining material in what had once been a richer scheme likened to Plas Newydd, Llangollen. Second staircase at the rear of the hall (recessed behind a moulded plaster arch of probable early C19 date, and top lit by a glazed lantern): also early C17, with turned balusters and square newels. Front W room formerly had wall panelling, removed c1970, exposing square panelled framing in internal walls. Rear W room has plaster moulded cornice encasing and panelling its transverse beam. At first floor, the earlier layout has been extensively altered, but the original roof-line can be traced, together with the framing of the original rear wall of the house, and the later raising in height.

Listed as a fine example of a C17 timber framed house of considerable quality, which is also of special interest for the quality of subsequent work, in which it was remodelled in a vernacular revival idiom. Although little of the interior detail associated with this phase survives, there is sufficient to give the house considerable character.