A Grade I Listed Building in Usk, Monmouthshire 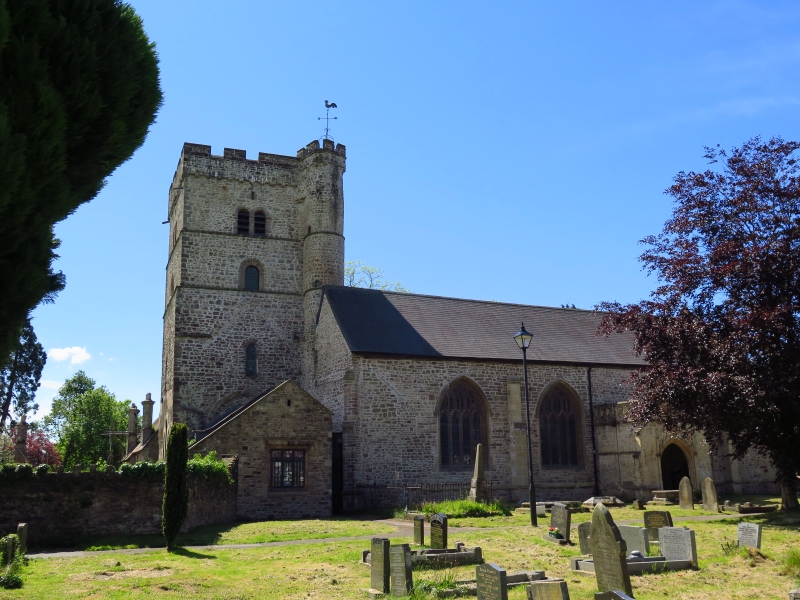 Location: A town centre church, just S of the main thoroughfare with large walled churchyard to W,N and E.

There is no evidence of a pre-Conquest church here. Possibly the first church was associated with the nearby Castle, its site probably the present nave W of the crossing tower. Priory was a Benedictine Nunnery founded by Richard Strongbow de Clare between 1154 and 1170. The Priory Charter was an important element in the planning of the town of Usk. Nave and crossing tower date from this early period. N aisle added in C13 for use of local population and widened in C15. The moulded NE pier may indicate the division between the nun's E bay and people's 3 W bays of the N aisle. As can be seen from the holes, a screen formerly separated the nave from the N aisle. The fine porches may have been built by Sir William Herbert died 1469. Dissolution in 1536. Chancel destroyed. In early C19 the large N vestry accommodated the Grammar School and the Writing School. TH Wyatt in 1844 vaulted the crossing space of former tower as sanctuary and added extra W bay to nave. Gallery removed 1875. Further restoration by GE Halliday, diocesan architect of Llandaff, c 1900 when Perpendicular style N and S windows and ribbed and boarded waggon roofs to nave and aisle were restored. Fine organ was designed in 1862 for Llandaff Cathedral by Prichard and Seddon and installed as part of c1900 restoration.

Priory church with mainly Norman and Perpendicular masonry. Nave, wide N aisle, W and N porches, crossing tower, NE vestry wing. Built mainly of stone rubble with mostly smallscale ashlar dressings, ashlar porches and buttresses; slate roofs with moulded apex stones. Main approach is from NW. W elevation consists of the stepped but almost equal width separately gabled W fronts of the nave and N aisle, both with C19 4-light Perpendicular-style windows, diagonal buttresses to corners. The N aisle is shorter and in the angle between the two units is one of two late medieval porches with quatrefoil parapet and moulded pointed arch decorated with crockets and flanked by little crocketed turrets, with moulded cornice, gargoyles to sides, angled corner buttresses with offsets and stepped coping. Inside is a 2-bay lierne vault and inner doorway with pointed moulded arch in a square frame with cusped spandrels; niche with holy water stoup to side, crocketed niche with figure above, stone benches and slender half round attached columns in each corner . N elevation has 3 similar Perpendicular style windows to nave, projecting continuous plinth course, stepped buttresses. Similar N porch with moulded pointed arched doorway with crockets and parapet with deep cross-moulded panels and central heraldic panel over the doorway apex and carved head above; gargoyles to sides and the stepped buttresses create a more uneven profile than at W. The tower forms the E end of the church with the steep gabled rooflines of former transepts and chancel clearly visible. Four storeys with embattled and corbelled parapet and round stair turret at NW corner, the storeys separated by string-courses. Ringing chamber has near-round-arched paired louvred lights, single Norman plain 2 ordered arch to tower chamber below; single round-arched lights within the former priory roof-space. The former E Norman arch to the crossing was filled with 3 stepped lancets to form current E window. Single storey vestry added at NE. S elevation onto The Priory not easily accessible. Nave has 3 windows similar to N, flat pilaster buttress and long SW lancet.

Interior has unrendered stone rubble walls and ashlar piers. Boarded C19 ribbed roofs with embattled wallplates on corble table; gilded bosses to N aisle; carved angels over the chancel screen. N arcade has circular piers with moulded bases and moulded caps and two orders of chamfered pointed arches; the E freestanding pier has 4 slender attached shafts. Across chancel and aisle a Perpendicular screen, 19 bays in all, with deep traceried openings, slender mullions, ribbed coving and rood beam with 4 bands of decoration, formerly supporting the rood loft. The screen has open cusped tracery below the middle rail to nave, unlike the more usual wainscot; the arched doorways are 2-bays wide. It is set on a later panelled dark wood base. Nave screen was coloured by Halliday c 1900 and has an inscription to middle rail; N aisle screen is dark-stained with no crest or middle rail. C15 brass attached to chancel screen commemorating of Adam of Usk, died 1430, chronicler of town and benefactor of Priory. Panelled pulpit, the remains of a 3-decker, with turned balusters to stairs is at SE nave; medieval parish chest adjacent. Fine mid C19 brass lectern. Plain pews. Font C12 at NW is deep and square with chamfered angles on a stem with 4 attached shafts. The chancel is the former E bay of the nave. Adjacent to NE pier is the lower section of the circular staircase tower. In the nave is a Norman upper window into the former crossing. This is now the E end with sanctuary division, one step up, just below the clustered E piers. These consist of originally triple half round columns with scallop capitals and plain stepped imposts which support two orders of arches with smallscale zigzag band and roll moulding to E arch; the blockings have reduced the triples to pairs except at the unaltered E. Plain painted cross-rib vault. Aumbry in angle at SE. Arched door to vestry in N sanctuary wall. Laudian altar rails with turned balusters. At E end of N aisle behind the screen is the fine organ with polychrome pipes, some suspended horizontally like trumpets; timber case with pierced quatrefoils and other enrichments and inscription from Benedicite. Stained glass in W nave, Ascension by Joseph Bell 1886 commemorating abolition of town corporation; Chancel S, St Mary Magdalene scenes also by Bell 1889; E chancel Christ, Virgin and St John, attributed to Percy Bacon 1913; S Nave Good Samaritan by RJ Newbery 1925. At SW a black painted wooden board with gold and design recording seating of 1726. Fine group of C18- early C19 black and grey marble monuments in Neo-Classical style arranged on W wall, some signed Tyley of Bristol, the most notable the central Prothero monument depicting a weeping willow, a falling column on a chest tomb with oval plaque with added inscriptions. Also a C17 gravestone to Walter Jones on W wall of N aisle.